Ariana Grande attends the 2015 Grammy Awards as both a performer and a nominee, nominated for Best Pop Vocal Album for “My Everything” and Best Pop Duo/Group Performance for “Bang Bang!” For Grande’s Grammy Awards performance, she’s said to be involved in a Stevie Wonder tribute in addition to her own performance. In the above interview, Grande’s brother Frankie is asked a few questions about his sister and her Grammys performance, but all he could really hint at was that it’s a “colorful set.” He couldn’t reveal what song she’s singing, but she did recently release her song “One Last Time,” so perhaps that’s what she’ll be singing. 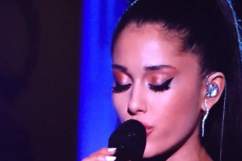 We all know that the Grammys likes to have surprises and switch things up on us last-minute, so we’ll have to see if the reports on Grande’s performance are true.

One thing that fans will definitely be keeping their eyes open for is an appearance by Grande’s boyfriend Big Sean – whether in the crowd, backstage, or a surprise onstage performance. In a recent interview with Billboard, Big Sean opened up a little about his relationship with Grande, stating:

She’s supercool — the coolest. Ever since, we’ve been friendly, hung out once in a while, and it just evolved. I respect her — so I don’t think I should talk about it.

So, cross your fingers for some Big Sean PDA tonight. 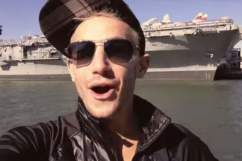