Tonight’s NBA All-Star game begins at 8:30 p.m. EST and Ariana Grande is set to perform at the haltime show. 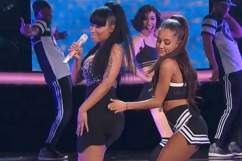 Yesterday, the NBA posted the below Instagram photo with this as a caption: A special guest is joining Sunday’s #NBAAllStarNYC halftime performance as part of the Entertainment Series presented by @jblaudio!

A special guest is joining Sunday's #NBAAllStarNYC halftime performance as part of the Entertainment Series presented by @jblaudio!

VH1 has reported that Nicki Minaj is suspected to be the surprise guest in Grande’s performance, writing:

Ariana Grande is the show’s main act, so it is very possible that the two will link up for “Bang, Bang” or Get On Your Knees” off of Nicki’s Pinkprint album.

Cross your fingers for a killer collaboration tonight.

As far as the run-of-show for tonight, the Washington Post has reported the schedule of tonight’s NBA event line-up as this:

64th NBA All-Star Game, 8:30 p.m. EST, TNT, TBS. Finally, the event basketball fans have been waiting for. After a few switches to the original lineup because of injuries, the startersat Madison Square Garde on Sunday have officially been named. Eastern Conference players include: the Knicks’ Carmelo Anthony, the Cavaliers’ LeBron James, the Bulls’ Pau Gasol, the Wizards’ John Wall and the Raptors’ Kyle Lowry. Western Conference starters include: the Grizzlies’ Marc Gasol, the Rockets’ James Harden, and the Warriors’ Stephen Curry and Klay Thompson. As of Friday afternoon, it was still unclear who the fifth starter would be for the West.