Carly Waddell has been the comic relief on The Bachelor 2015 as she competes for the love of star Chris Soules. From her hand puppet of contestant Britt Nilsson, to her epic quote about Ashley Iaconetti where she said, “Her mouth is not a virgin,” she has been a beloved cast member of the show. Unfortunately, reports are that Waddell does not end up with Chris Soules in the end and she does not get to go on a hometown date. Read on for the facts on Waddell and her journey on The Bachelor with Soules.

On episode three, the girls had to show off their “farm girl skills” and go through a bit of an obstacle course. Waddell won and also scored her first kiss with Soules by the end of the show. Soules told People about how he was impressed by Waddell that day, stating:

That girl really stepped up her game. I mean she drank unpasteurized goat’s milk and she’s lactose-intolerant! And did you see how she caught the pig? While the other gals were running all over the place in that pen, Carly smartly played it cool and kind of waited for the pig to come to her. Well done! More than anything, Carly showed me that she’s up for anything and she puts her heart into everything she does. And it was nice just spending some time with her because up until that point we hadn’t gotten much of a chance to chat.

And, as for what he thought when Waddell finally kissed him? Soules said:

I was shocked when Carly grabbed me at the beginning of the night and planted one on me. It was really nice to see her put herself out there.

2. Britt Nilsson Was Outed By Waddell Who Was “Freaking Out” For Soules

Sometimes on the Bachelor we celebrated with Gluten free, dairy free, bacon cake. Cuz I have the worst food allergies EVER….and why NOT?!?! #TheBachelor #BachelorNation #glutenfree thanks @showmeyourmumu for my sweater!!!

When the girls take a road trip to see Soules’ tiny hometown Arlington, Iowa, Nilsson understandably talks about the shock she had when seeing just how small the town really was. However, Nilsson tells contestant Jade Roper and star Chris Soules that she realized she loved it there as she saw the sun setting over the corn fields. She told Soules that she would love to raise a family there with him. Waddell sits down with Soules on a group date and starts to tear up, telling him that she’s “freaking out” for him because she says Nilsson isn’t being honest. Waddell believes Nilsson will leave Soules and he doesn’t deserve someone like that.

Later on in the episode, Nilsson confronts Soules about him giving the group date rose to contestant Kaitlyn Bristowe and the situation really opens Soules’ eyes about Nilsson. Nilsson’s behavior pleases Waddell to no end because she feels that even if she doesn’t end up with Soules, she knows he will not end up with a “bad girl”

3. They Shared The Most Awkward Date In Bachelor History

Waddell and Soules’ first date was with a love guru, who ended up being a sex guru. They had to go through different sex exercises with each other and at one point, the two started removing each other’s clothing, which made both of them feel very awkward. Finally, Waddell put them out of their misery when she let Soules know she felt uncomfortable and the stripping stopped. Soules talked about the situation, telling People:

When Tziporah started talking about “removing masks” it was pretty clear that both Carly and I were feeling really uncomfortable. I was relieved when Carly said she didn’t want to go farther. I mean, what was Tziporah trying to get at? If it were up to her, I bet we’d have ended up fully nude.

Unfortunately, for Bachelor fans, there was no naked Soules. 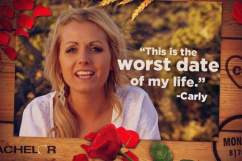 4. Soules Says There Was a “Creepy Guy” Who Was Watching His Sexy Solo Date With Waddell

What viewers didn’t see was that there was apparently a “creepy guy” looking on as Soules and Waddell had their awkward and very sexual date. Soules wrote all about it in his blog, stating:

When it was my turn to massage Carly, I’m not gonna lie, things got pretty awkward. It also didn’t help that some random guy was sitting behind the cameras about 15 feet away smoking cigarettes and staring at us like he wanted to join in. Not cool. I don’t know who he was, but he wasn’t a producer or a crew guy because I hadn’t seen him until that day, and I haven’t seen him since. The only time I see that creepy guy is in my nightmares!

5. Waddell Revealed To Soules That She Hasn’t Been Treated Well In the Past

This was a perfect moment in time. #thebachelor #bachelornation #sing

When Waddell got to meet Soules’ sisters, she opened up to them and began to cry because she said she hasn’t been treated well in the past. As Waddell spoke to Soules himself about her past relationships, he couldn’t understand, telling People:

When Carly said she felt like she wasn’t worthy of love, it broke my heart … I hate that Carly hasn’t been treated well in past relationships and hasn’t been made to feel wanted or desired. The girl is beautiful inside and out, and any man who wouldn’t desire her is crazy.