Kaitlyn Bristowe is in the final three of The Bachelor 2015 and we’ve got all the info on her relationship with Chris Soules. Read on for all the spoilers surrounding Bristowe, elimination news, and how Soules felt about her behind-the-scenes.

1. Bristowe Made A Love Gesture Similar to Soules’ From When He Was On The Bachelorette

During Bristowe’s hometown date with Soules in Arizona, Bristowe was trying to think of a way to show Soules her feelings. Throughout the season, Bristowe has had difficulty completely showing her vulnerable side and Soules has been wanting to see how she truly felt about him. To show Soules she was starting to fall for him, she had a huge Billboard on the street with both of their names on it and a heart in between. Soules absolutely loved it, writing in his blog about a similar gesture he had made when he was on The Bachelorette:

Some of you might remember that at my hometown date with Andi, I had a plane pull a sign that said “Chris Loves Andi.” I wasn’t ready at the point to say the words “I’m in love with you” to her, but I was almost there. Seeing that billboard with Kaitlyn’s and my names, I knew what that meant. I knew she was on her way to being in love, and it was her way of telling me how she felt. Knowing that Kaitlyn had been reserved in the past with her feelings, it meant the world that she put herself out there like that.

Went a little darker with my hair, thank you @michaelgibsonhair @brushsalonyvr and then BONUS @sararosebuzz taught me some make up tips, pamper city.

Chris Soules has his first fantasy date in Bali with Kaitlyn Bristowe. During the day, they explore the area, play with some monkeys and Soules gets peed on by one of them. Bristowe and Soules are shown kissing in their fantasy suite and Soules has said that intimacy is very important to him. Many speculate that the two had sex in the fantasy suite, however, there are no reports confirming this. At the end of this episode, Bristowe is the one who gets sent home, as source Reality Steve has stated.

3. Rapping Has Been a Theme With Them

Kaitlyn shared Chris' original rap lyrics from their hometown date. He may not be a rapper, but he definitely tried! #TheBachelor

Throughout the season, Soules has tried to participate in Bristowe’s love of rapping, especially on her hometown date. But, this wasn’t the only time Soules tried and failed at it. He told People:

Writing a rap with Kaitlyn was the perfect way to spend the day. You didn’t get to see it, but at the cocktail party in Deadwood, I wrote a little rap that I performed for her. I sucked, once again, but I thought it was something she’d enjoy. So, writing a rap together in her hometown was appropriate. I wanted to take it seriously and write meaningful words, and I think she was really listening to what I had to say. And yes, you don’t need to tell me, I know: I suck at rapping. I suck at rapping, I suck at speeches, I suck at writing songs. I farm!

When Bristowe had a surprise for Soules on the hometown date and showed him the billboard sign, Soules was just happy he didn’t have to do another rap.

4. She Had To Share Her First Solo Date With Jimmy Kimmel

Stick to farming Christopher Douglas!! But thank you for being a good sport #thebachelor

On this season of The Bachelor, Jimmy Kimmel posed as a guest host for one episode and got to pick what Soules would be doing on his solo date with Bristowe. The two got to have a date at … Costco. Soules wrote in his blog:

When she told me what the date card said, I really thought we’d be joining an “exclusive club” with “sweeping views and unlimited hors d’oeuvres.” Little did I know sweeping views meant aisles of discounted products, and these so-called fancy “hors d’oeuvres” meant free samples! But, you know what? Turns out it was actually a good idea Jimmy had. Sending us on a “normal” date, something that a “normal” couple would do, really helped me see a future with Kaitlyn. That, and she was so much fun to run around the store with, checking off the ridiculous items on Jimmy’s list.

After Costco, Soules and Bristowe were grilling food for Kimmel and chilling out in a hot tub. It was a delightfully awkward date.

5. Bristowe Cursed At Soules When She First Met Him

Ellen says don't put all your cards out on the table.. Ellen where were you 5 mins before this happened @theellenshow

Bristowe is a funny and free-spirited girl, which is why viewers love her. During her limo arrival on the premiere episode, she told Soules that she didn’t know much about him, but knew that he was a farmer. She then told him that he could “plow the fuck out of her field any day.” It’s moments like this that make America love Kaitlyn Bristowe. Perhaps that’s why she’s rumored to be one of the front-runners to be the next Bachelorette. 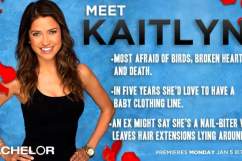 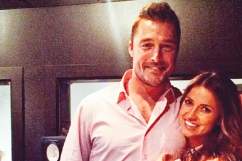 Is ‘Bachelor’ 2015 Contestant Kaitlyn Bristowe the Next ‘Bachelorette’?

Read More
Chris Soules, Reality TV, The Bachelor, TV
Read on for the facts on the relationship of Bachelor star Chris Soules and Kaitlyn Bristowe.