Katy Perry was dating DJ Diplo for a while, but they are no longer romantically linked, though they are each in feuds with pop star Taylor Swift. So, why did Diplo and Perry break up? According to Daily Mail, they “wanted different things” and Perry wasn’t ready to settle down … but they had only been going out a matter of weeks. An insider told Daily Mail:

Diplo broke up with her because she does not want to be in a serious relationship. She’s doing OK and not too sad about it. They wanted different things. She doesn’t want to get married again – at least not anytime soon. She wants to date and he wanted something much more serious. It was too much, too soon.

Apparently, it was Diplo’s request to introduce her to his parents that spooked the pop star.

Perry is currently reported to be dating John Mayer, her former flame. The two have had an off-again-on-again relationship since 2012 and are reported to be back on because they “missed each other.” They were recently seen together dining out with friends and fans are wondering if they’ll see any signs of Mayer at the Super Bowl when Perry performs. 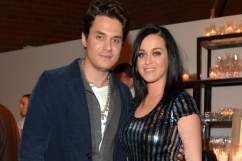