In addition to being nominated at the 2015 Grammy Awards, Ed Sheeran has some big collaborations ready for the Grammys. The LA Times reports that:

This year’s wild combinations include British beatbox folkie Ed Sheeran, whose “X” is nominated for album of the year, teaming with a newly reunited Electric Light Orchestra. Though ELO’s Jeff Lynne could be Sheeran’s grandpa, they’re slated to share the stage and will likely perform Sheeran’s big hit “Sing.” 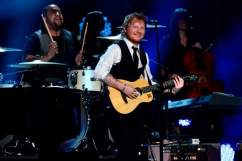 Alongside Lynne and Sheeran, piano jazz man Herbie Hancock, guitarist John Mayer, and Questlove from The Roots are said to be performing with them.

Tonight, Sheeran is nominated for Best Pop Vocal Album, Album of the Year and Best Song Written for Visual Media for ‘I See Fire’, which featured in ‘The Hobbit: The Desolation of Smaug’. If he is picked as a winner, this will make for his first Grammy Award win.

Check out Sheeran’s music video “Sing” in the above video.