House of Cards season 3 starts with twists and turns. The official Netflix synopsis for episode 1 reads:

A rocky start for the Underwood Presidency. Frank wants to introduce an ambitious jobs program, while Claire sets her sights on the United Nations.

Read on for spoilers.

The episode begins with a presidential motorcade in a small town. President Frank Underwood is visiting the gravesite of his father in Gaffney, South Carolina. He doesn’t want to, however, and informs the audience it is just an act to “appear human.” He doesn’t like his father, and before leaving he urinates on the tombstone of “Calvin T. Underwood.”

Back at the White House, we learn that Doug Stamper didn’t die in the season 2 finale after an altercation with a fleeing Rachel Posner. We then see a montage of his recovery in a hospital with a Dr. Lanjawni, who informs Doug that he suffered damage to his left frontal cortex, which means his motor skills will be a struggle and his emotions will be unpredictable.

While continuing his recovery at the hospital, Doug learns from a TV news broadcast that Frank’s approval rating is worse than President Walker’s when he resigned and that Frank is about to launch his presidential campaign for 2016.

2. Claire Visits Doug at the Hospital

Later, Claire visits Doug at the hospital and informs him that Frank’s presidency is not going well. The Republicans won’t send him a bill he can sign and the Democrats aren’t cooperating much, either.

Claire then asks if Doug remembers anything about what happened. Doug starts talking about Rachel, but then decides to lie—with Claire’s approval—about a new story: that he was carjacked by a strange man. Claire then asks Doug if he has any idea where Rachel is, because it’s important that her and Frank find her.

She then tells Doug that when the police question him, tell them only about the strange man and nothing about Rachel.

Dr. Lanjawni releases Doug from the hospital to his brother Gary.

After getting released from the hospital to his brother, Gary, Doug finds his home fully stocked with food by Frank and Claire. He then urges Gary to leave because they haven’t really spoken in 10 years. Gary is upset at this but obliges his brother’s wishes.

Doug then catches Frank on The Colbert Report where Frank announces a new jobs program called “America Works”—or “AmWorks” for short—to solve the problem of unemployment like FDR’s “New Deal.” Colbert then states the facts: under the six month old Underwood presidency, unemployment has gone up, trade deficit with China has gone up, the number of vetoes have gone up, and Americans think Frank lacks leadership.

Doug then meets Gavin Orsay, the hacker and informant for the FBI, and asks him for help in tracking down Rachel Posner.

Later, Doug receives a phone call to come meet the president. He slips and falls in the shower getting ready to go and breaks his arm. He splints it with a wooden spoon and goes to meet Frank.

With the help of Remy, Frank presents his America Works program to his inner-team. Frank wants to cut entitlements for seniors and use the $32,871 every senior gets to finance jobs in infrastructure, military, and the private sector. After an interruption from team member Paul, who offers a different version of the President’s plan, Frank says he “doesn’t want a version” but “a vision.”

Paul is then fired from the team by Remy.

At a meeting in his Oval Office, we learn two things: Frank made Donald Blythe his Vice President, and that Frank will now be able to appoint a new Supreme Court justice… but he doesn’t want to quite yet. The justice has Alzheimer’s and wants to leave his post, but Frank asks him if he can hold off on his retirement because he will need his help in pushing America Works legislation.

Frank then meets with Doug and informs him that he doesn’t need him quite yet and that Doug should focus on his recovery. Doug seems put off by this but appears to accept it.

Doug goes home and struggles with his depression because he feels unwanted. He has a call girl come over. He asks her to squirt bourbon into his mouth from a syringe.

In the situation room, Frank goes over the pros and cons of using a drone to take out a highly-wanted terrorist, Abdullah, in what appears to be Yemen. But he is worried about ruffling feathers with Muslims in the region and also a Russian president named Petrov. Frank decides to take out the target, but only if no civilians are killed in the process.

Meanwhile, Claire meets with the GOP presidency front runner Senator Hector Mendoza about her potential nomination by Frank as the Ambassador to the United Nations. The senator informs her that he won’t actively block her.

Back at home, Frank informs Claire that Catherine Durant doesn’t approve of his nomination of Claire as Ambassador to the United Nations. Frank thinks they shouldn’t rush it. Claire comes back at him and says she wants him to announce her nomination this week.

During their conversation about this, the Secretary of Defense calls Frank into the situation room from home. He tells Claire to come with him because he wants to show her something.

In the situation room, Frank commands a drone strike on Abdullah, who is on a bus that might have children on it. The target is destroyed.

After viewing the drone strike, Claire tells Frank she still wants the Ambassadorship to the United Nations. 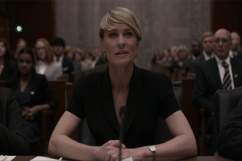