So we’re into episode 4 of season 3 of House of Cards. The show is dealing with drone strikes, Claire’s moving and shaking with the United Nations and a potential challenger to Frank’s throne.

1. To Try to Stop Heather Dunbar From Wanting to Run for President, Frank Puts Her on the Supreme Court

In a pretty shrewd move, when Frank gets word that Heather Dunbar, the solicitor general, wants to run for president. During the opening scene it’s pretty clear that something is wrong with a member of the Supreme Court. So Frank informs Dunbar that that judge has Alzheimer’s. He then says that Heather is woman to replace that forgetful justice. She accepts with a slight hesitation. But there’s a more severe problem, the judge doesn’t want to resign just yet. He’s healthy enough to continue he says. In a piece to camera, Frank tells us that he won’t “destroy this man.” Frank goes back to tell the suffering judge to resign to save face. This doesn’t appease Dunbar, she goes on CNN, unbeknownst to Frank, and announces her candidacy for president. Dunbar goes back to the president and she tells him that she’s a friend of the judge with Alzheimer’s. Dunbar then tells the president that she doesn’t believe Frank when he says he’s trying to help a man with a serious illness.

In a great scene towards the end of the episode, Doug Stamper goes to Dunbar and tells her that he wants to be part of her “team.”

2. Frank Is Dealing With the Fallout of a Drone Strike

In a piece that gets a little underplayed in this episode, but is still important, Frank speaks with a man who was injured in a drone strike in the Middle East. The wheelchair bound victim goes through a seizure during their conversation. It’s something that clearly makes Frank very uncomfortable. I always like those bits when Frank gets taken out of his comfort zone.

3. Doug Is Still Searching for the Love of His Life

In some creepy moves, Doug and the McPoyle, are still searching for Rachel. The creepy hacker goes to some kind of AA meeting where Rachel’s former girlfriend speaks. He talks to her afterwards and gets some info. In an earlier scene, the hacker had asked Doug for more info about Rachel so that he can find her.

4. An American Gay Rights Activist Gets Arrested in Russia

Frank gets the word that an American gay rights activist named Michael Corrigan has been arrested in Russia. A pretty good storyline, considering the Russian government’s real life a**hole opinions towards homosexual rights. The arrest all stems from Claire’s pushing of a UN resolution that the Ruskies don’t like. The prez, Frank, tells the media that “Mr. Corrigan’s detainment is unjust.” Frank then gets grilled by a reporter over his gay rights records, interesting.

5. It Ends With a Killer Scene

Towards the end of the episode, Frank goes to the priest who said the funeral for a group of soldiers earlier on. The priest, who rides a motorcycle, lectures Frank on theology, on how the commandments are open to interpretation. Then, after asking the priest to leave, they’re in a church, Frank spits on a statue of Christ on the cross. The statue then falls close to Frank, nearly crushing him. Pretty intense scene. Among the wreckage, Frank picks up Christ’s ear and tells the camera, “Well, I’ve got God’s ear now.” Classic Underwood. 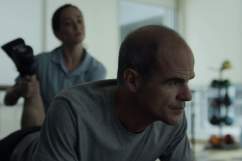 Read More
Breaking News, Celebrities, House of Cards, Kevin Spacey, TV
So we're into episode 3 of season 3 of House of Cards. The show is dealing with drone strikes, potential presidential candidates and Claire's, the first lady's, moving and shaking with the United Nations.