So Frank has lost one of his soldiers, Doug Stamper, to a rival campaign. Claire is at the UN trying to start a war with Russia, or threatening to start one at least. There’s also the small matter Frank and Claire not sleeping in the same bed.

Frank’s former right-hand man is trying to get job working for Dunbar’s presidential campaign. He’s offered $20k per quarter, Doug says he wants $250k per year, I’m in the wrong job. Later in the episode, Doug and Dunbar have a sit down meeting, it’s a wonderful scene. He produces a document that he says Claire Underwood wanted him to destroy, he didn’t. Dunbar says she doesn’t want that kind of campaign. Doug settles for $150k and a $100k win bonus if she gets the nomination.

Frank uses the mayor of DC to announce his policy. (Netflix)

Frank is pushing his “America Works” initiative, which is being brought forward under the guise of unemployment being a national disaster. He involves FEMA in his efforts as well as the mayor of D.C. The mayor goes to the media to tell them that he’s asking FEMA for $3 billion to help employ citizens in the nation’s capital.

In a short, but seemingly poignant scene, Frank and Claire are talking in one of the bedrooms. When the president tells his first lady that he’s never spent the night in there, she tells him to get out. Well not really, she says she has to leave early the next morning. He goes back to his room and plays an app game on his tablet. Classic Underwood. She later goes to the Oval Office and tells him that she feels bad about it. Apparently, Claire started sleeping in there when she had a cold and she doesn’t know why she stayed.

4. Heather Dunbar Is Using the Imprisoned Gay Rights Activist to Help Her Get Elected

The arrest of a gay rights activist in Russia is explained as being a power play by the Ruskies over the U.S. wanting to put peacekeeping troops in the Jordan Valley. Apparently, Russia’s fictional president Putin, oops I mean Petrov, sees the U.S. being less than 1,000 miles from the Russian border as being a serious threat. Claire in her role at the UN threatens sanctions against Russian working in the U.S., because they always workout so well. Meanwhile, Heather Dunbar heads out to Iowa with the imprisoned gay rights’ activist’s husband. She meets some people, exhilarating stuff. The female has a challenge though in the shape of Jackie Sharp, Frank had plucked her to run against Dunbar to try and cut the female vote. Jackie first has to get married, so she gets engaged. Remy, her former lover and the most boring character in this show, isn’t happy.

5. There’s a New Reporter in Town

“Kicked out a bull and let in a dragon” is what Frank tells his press secretary when a new reporter, Kate Baldwin, from the Telegraph gets a story about how broke Frank has made FEMA over his “America Works” initiative. Another new writer in town is a man named Thomas Yates, a novelist who has struggled to recapture past glories. Frank likes him because he wrote the blurb for the app game that the president likes to play. Frank meets him and tells the writer that he wants him to write propaganda for “America Works.” 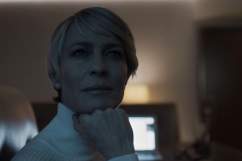 Read More
Breaking News, Celebrities, House of Cards, Kevin Spacey, TV
So Frank's greatest ally is going to work for the enemy, his wife won't let him sleep in their bed and there's a new reporter in D.C. who isn't taking any sh*t.