Frank and Claire Underwood take a journey to beyond the Iron Curtain where the first lady spends considerable time in jail. Back at home, there’s a burgeoning romance between Doug Stamper and his therapist as well as some bad news in the search for Rachel.

1. Frank Is Working on His Autobiography

Our episode opens with Frank and Claire on Air Force One heading for Moscow to free the gay activist and look at the northern lights. We learn that Frank’s first job was helping a weed farmer, though he didn’t smoke it because the farmer fertilized the crop with the fruits of a septic tank.

2. The Search for Rachel Goes On

The McPoyle, who goes by Max, is still searching for Rachel and is embedded with some Christians somewhere. He tells Rachel’s ex-girlfriend that he used to be into drugs and women but is now a better person. The ex-girlfriend wants him to get tested for Aids. He takes the test and it’s positive. Bummer, but it’s not real. In a heart-to-heart conversation after his diagnosis, Rachel’s ex tells Max/McPoyle that Rachel left her because “things were moving too fast.” We’ve all heard that one, right? Later, he goes back to his desk job and hard at work trying to find Rachel, using the information the ex gave him.

3. Rather Than Read a Mealy Mouthed Statement, the Gay Rights Activist Commits Suicide

Michael Corrigan, the gay rights activist who is in prison in Russia, won’t accept the clemency offered by the Ruskies. In a serious issue, Corrigan says that he won’t go home unless the law against homosexual propaganda in Russia is repealed. So when Corrigan won’t leave, Claire stays with him. They have dinner in the cell. Corrigan admits to Claire that he and his husband haven’t slept together in years.

Claire tries to convince Corrigan to leave Russia, telling him that he’s being selfish for not just reading a statement that would see him released. The statement praises Russia’s laws. Corrigan adds that he went on hunger strike but only last six days. Eventually, he tells Claire that he’s needs time to think. She lies down in the cell, when she is awoken, Michael Corrigan commits suicide.

4. Claire & Frank in Russia Is Awesome

Frank’s meetings with the Russian president are pretty awesome. Petrov tells Frank that he doesn’t believe in Russia’s homophobic laws but that enough people do in the country so his administration are following suit. Eventually, Frank and Petrov agree on a statement that Corrigan might like, they’ve been kept abreast of him and Claire in the cell, but it’s too late, because of the suicide and all. Claire tells the world that he hanged himself with her scarf. She adds that Corrigan had been willing to die for his cause. She closes with, “shame on you” to the Russian president. God, how much would you love Michelle Obama to march up to Putin’s face and say that? Frank’s biographer tells her she did the right thing back on Air Force One. The episode closes with a great argument between the Underwoods on Air Force One, where Claire tells Frank, “I shouldn’t have made you president.”

5. Doug Has a Thing for His Therapist

The two of have brief, awkward flirtations at the gym where Doug is rehabbing his injuries. How will this impact the search for Rachel? The therapist tells Doug that once the repair his physical problems, they’ll work on removing his cell phone. Oh you kids. 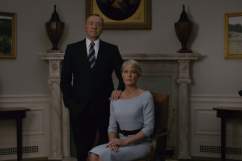