After nearly falling apart, Frank and Claire’s marriage is stronger than ever when they get their vows renewed. Doug finally has sex with a lady that he didn’t have to pay for and Claire dyes her hair.

1. The Episode Happens in Flashbacks

After what went on in Russia, we thought Frank and Claire would be as distant as they’ve ever been. But no, the episode opens with them having their vows renewed. Not only that, but Claire has her hair black, not the traditional blonde that we’ve come to expect from Robin Wright since her days as “Jenny.” The scene then shifts back to “a month ago” and they’re back on Air Force One hating each other. They then get their White House portrait done, awkward.

Later, Frank goes to FDR’s memorial to pay his respects. He’s struck by the statue of Eleanor Roosevelt, the statue that notes she was the first U.S. delegate to United Nations. This leads him to make amends with Frank, this is when couple agree to the vow ceremony. At the end of the episode, the couple sleep, just sleep, together.

2. Frank’s Biographer Is Getting to the Real Story

During a drunken conversation at the residence in the White House, Frank admits to his biographer about the distance between him and Claire. Remember, we’re still “a month ago” from the start of the episode with the renewed vows. The biographer, Yates, tells Frank that he’s not interested in publishing those details. The new reporter in town, Kate Baldwin, is figuring out why he’s there. She also describes his writing as “gorgeous.” I want people to describe my writing as “gorgeous.” Then later, the rug gets pulled out from under us when Yates tells Frank that his friend, who is dead, wrote the book for which he takes all the credit. Yates leaves Frank and talks to Kate Baldwin, the new reporter, they’re totally gonna pork.

The hacker/McPoyle/Max has found Rachel in Santa Fe, New Mexico. He shows a picture to Doug who remarks that the love of his life’s “hair is different.” The hacker wants a passport from Doug so he can get away, Doug’s reluctant. But there’s new heartbreak for Doug as his therapist aka the new love of his life, is moving to Seattle. Poor Doug, this goes back to Season 2 when he wasn’t getting any. He does though correct this horrible issue when he goes to her going away party and winds up sexxing her up after everyone has left. The therapist tells Doug the next morning that they will probably never see each other again.

4. Frank Is Pushing Ahead With ‘America Works’

Frank is relentless in making “America Works” work. He arranges to make a radio announcement about the successes the project had on the anniversary of FDR announcing the New Deal. There’s also some United Nations stuff that Claire gets into at the end of the episode, but it doesn’t really grab you. This episode has been well focused on the relationship from the first couple. It’s impossible to care about this.

5. There’s Some Tibetans in the White House

A group of Tibetan monks are in the White House working on an art piece of some sort. Frank gets told that it’s part of a “cultural exchange.” Watching their intricate work is hypnotizing. The monks seem to appear around the time when Frank and Claire have a frosty exchange. Frank is disappointed when they leave, their leaving coincides with the vow renewal. 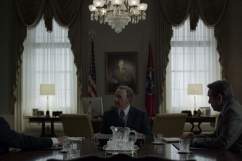 Read More
Breaking News, Celebrities, House of Cards, Kevin Spacey, TV
After nearly falling apart, Frank and Claire's marriage is stronger than ever when they get they're vows renewed.