In House of Cards Season 3, Episode 8, Frank Underwood prepares for his biggest decision of the season, one that will have severe ramifications. The official Netflix synopsis for Episode 8 is:

A hurricane endangers more than just the entire East Coast and Frank must make a difficult decision.

Frank speaks with Freddy in the oval office. (Netflix)

A portion of Episode 8 is narrated by two supporting characters: Kate Baldwin and Thomas Yates. Baldwin is the journalist who asks all the questions in the White House and in the media, and Hayes is the reserved author who is helping Frank pen his biography and distant from the media.

From both perspectives, Baldwin is writing an article that criticizes President Underwood’s decision making callously, and Hayes is reciting lines from — what would later be revealed in the episode — the prologue to Frank’s biography.

Both Kate and Kevin meet at a bar later in the episode and share a “few drinks together.”

The potential Category 3, maybe 4, storm is altering the plans of Frank. In earlier episodes, Frank had been on a crusade against FEMA, and now that the storm is closer to making landfall and bringing substantial damage with it, he must take the storm more seriously.

The Hurricane Faith bill was originally proposed at $2 billion; with it there was no Disaster Relief Fund (DRF) replenishment, no FEMA money (obvious) and no agency funds. Eventually after a meeting with cabinet, an acceptable bill $10 billion for the storm morphed — enough to cover the cost of the storm — but with a price. That price is, Frank must defund America Works, his “New Deal” and something he fought very hard for in the first place.

Later in the episode, Frank signs the bill into law.

The storm directly impacted politics and the campaigning of both Jackie and Heather directly. As a compromise, Heather offers a temporary truce so that both women can help aid families in the storm — Heather tells Jackie she plans to volunteer with the Red Cross. Reluctantly, while thinking about strategy aloud, Jackie comes to her senses and agrees to the temporary “cease fire.”

Doug gets a hold of this information and ends up calling Seth as a way of getting to Frank to let him know that Jackie is making decisions on her own and can’t fully be trusted.

The temporary military strategy of deploying chiefs and isolation worked. Russia obliged, cooperated and sent troops of their own.

Claire also saw a victory in the United Nations as U.S. ambassador, but, unfortunately, her husband was not able to enjoy her success with her.

In the most shocking moment of the episode, Claire wakes up Frank the morning after he signs the bill into law to let him know that Hurricane Faith changed direction at the last minute, causing the storm to mostly miss landfall.

The consequences of Frank signing the $10 billion bill into law were enormous. Finally, after months of trying to get traction, there was some momentum for america Works in Congress. That momentum stalled and ultimately ended because now the funding was used elsewhere. 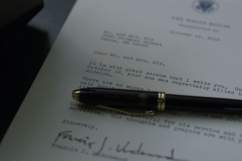