In House of Cards Season 3, Episode 9, Frank and Claire have to deal with the consequences of a military decision, which jeopardizes both of their political futures. The Episode 9 synopsis on Netflix is:

The Jordan Valley erupts in chaos just as Frank’s campaign is picking up steam. Claire gets disturbing intel and counsels him.

The episode has an incredibly happy beginning. Kate and Kevin are seen sleeping together and Frank and Claire are out on the campaign trail. Everything is fine until Claire gets a disturbing phone call about the killings of troops.

Israel immediately looked to blame Palestine for the attacks. It is also learned that the troops are Russian deaths.

President Petrov is no walk in the park for President Underwood. Frank and Viktor exchange a phone conversation about the Russian deaths. Frank acts sympathetic, but Viktor does not buy it. Frank makes note about how Russia is preventing the United Nations from having access to the blast site. Insulted, Viktor says that this is a “Russian matter” and promptly hangs up on Frank.

Claire meets with Moryakov — Russia’s Ambassador to the UN — to discuss how to handle the killings. In the conversation, Moryakov, shrewdly, gives the impression that the killings were intentional and orchestrated by Russia; he does this by painting a victim card and saying that higher-ups have more control over the situation.

Claire bought the information and related it to her colleagues. Moryakov used this as a ploy, designed to provoke the United States to make the first, aggressive move into handling the blast site. Later in the episode, Frank oversees the deployment of more U.S. troops.

At the beginning of the episode, Remy delivers a talking points document to Jackie. In the conversation, Remy snaps, but later apologizes to Jackie and sympathizes with her situation of trying to balance her duties in Washington, on the campaign trail and with her family.

Later in the episode Remy is pulled over for allegedly speeding. During police questioning, he snaps again, and is forcibly arrested. He later visits Jackie to tell her about the incident. Caught in the moment, he kisses her, which she responds to by sympathizing with his situation and reassures him that she will always be there for him — as a friend.

Doug Finds Out About Rachel’s Death

Early in the episode, Doug leaves a message saying his mother died to Seth to relate to Frank.

In a diner, Gavin asks Doug about his passport restriction and how much time he has left working and being a pawn for the FBI. Gavin then slides Doug a folder, in it, containing definitive proof that Rachel was brutally and bloodily murdered. At first, Doug is skeptical because the name filed on the police report is “Jane Doe,” a common term used by the police given to unidentified bodies.

Later that night, Doug goes out to a bar and gets obliterated and gets himself kicked out in the process. It is known that the reason for his alcohol relapse this time around is Rachel’s death. Seth eventually tells Frank about “Doug’s mother.” Frank organizes a meeting with Doug. In the meeting, Doug reveals the evidence of Rachel’s death to him and admits he’s relapsed. Frank, annoyed, has remy escort Doug out. In a fit of rage, Frank calls Heather and unloads his frustration out on her, threatening her to not put Doug’s life in danger again.

Gary returns and embraces Doug, looking to help his brother out. 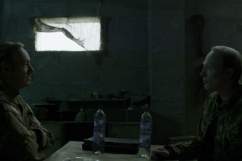 Read More
House of Cards, Kevin Spacey, Netflix, Politics
The Jordan Valley erupts in chaos just as Frank's campaign is picking up steam. Claire gets disturbing intel and counsels him.