On tonight’s second episode of the back-to-back showings of Celebrity Apprentice, the contestant eliminated was … Ian Ziering … and Johnny Damon … and Brandi Glanville. Three firings!

The contestants meet at Lucille’s Grill and Joan Rivers is back as an advisor. Their task is to make music with Anheiser Busch, creating a jingle to bring to life their line of Ritas products. They are given their own musicians to complete their tasks and are being judged on entertainment value, creativity and branding.

Congrats to the winning team! What an honor to have Joan Rivers part of #CelebApprentice this season. pic.twitter.com/tDiWVgU6kJ

Donald Trump asks Geraldo Rivera who he likes from the other team and he says Leeza Gibbons. In turn, Trump moves Gibbons over to Team Vortex and she becomes Project Manager. Brandi Glanville was the Project Manager for Team Infinity, playing for $100,000.

Rivera felt they should go for a Latin theme and Gibbons said the secret to a jingle is something you can’t get out of your head whether you like it or not. They ended up going for a party theme. Team Infinity circles around a summertime theme and Ian Ziering is coming up with tunes that the rest of the team doesn’t seem to be on board with. Damon and Ziering have ideas and, while waiting on Damon, Ziering becomes impatient and gets into a fight with Glanville, who is the project manager. Glanville fells Ziering is pouting and being condescending to her. They ultimately go with Damon’s pick.

Gibbons’ jingle was “Nice Over Ice” and was well-received as it was very catchy. Ziering didn’t exactly like the jingle and he said that if they were going back to the boardroom.

In the boardroom, Team Vortex only had good things to say about each other. Team Infinity, on the other hand, had some issues as Glanville brought up that she had a tough time working with Ziering. Ultimately, the executives felt that Team Infinity’s jingle wasn’t catchy and was a bit too wordy, so Team Vortex won.

When defending himself in the boardroom, Ziering sang his jingle and Trump said he could never use it because it was to the tune of “La Cucaracha.” In turn, he was fired. As Ziering left the boardroom, Trump told Glanville and Damon to stay. He then let them know he’d be firing someone else as well. Glanville couldn’t say anything bad about Damon, but it was Damon’s jingle that lost. Joan Rivers chimes in and says the project manager should be to blame, but in the end, the person who was fired was Johnny Damon. Then, another big surprise – Brandi Glanville was also fired. 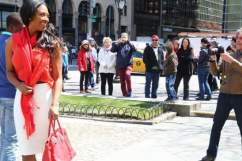