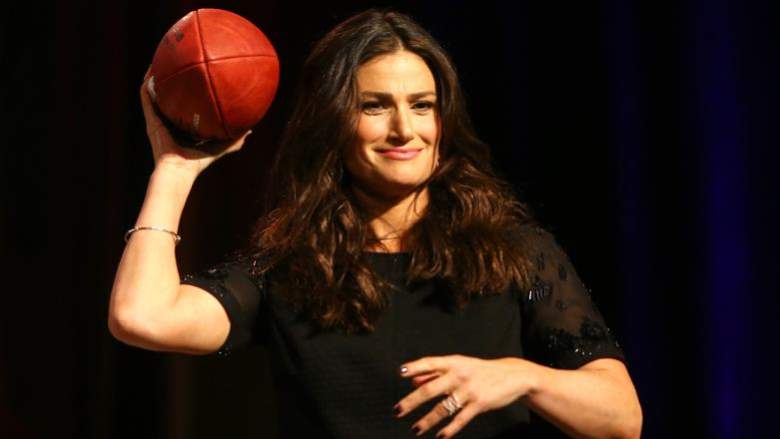 Idina Menzel was known for years on the Broadway circuit, but her song “Let It Go” from the animated movie Frozen really put her on the map. And when John Travolta mispronounced her name as “Adele Dazeem” at the Oscars, no one could stop talking about her. Now she’s singing the National Anthem at the 2015 Super Bowl as a successful artist with a net worth of $10 million. Read on for all the facts on Menzel below. 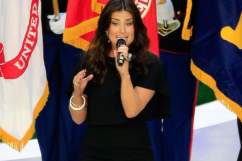 This is something I said in an interview a few months ago. pic.twitter.com/J63wLZJHnp

Viewers are wondering how the National Anthem will go considering Menzel had a rocky performance while singing “Let It Go” on New Year’s Eve in Times Square this year. She had off notes and struggled a bit with her voice in the freezing cold temperatures. Upon hearing all the criticism surrounding her performance, Menzel took to Twitter to defend herself with the above tweet.

2. She Met Ex-Husband Taye Diggs While Performing In Rent

In the 1990s, Idina Menzel played the role of Maureen Johnson in the Broadway musical Rent, where she met her ex-husband Taye Diggs. The couple married in January 2003 and have one son together.

When the two separated, Menzel and Diggs’ reps released the following statement:

Idina Menzel and Taye Diggs have jointly decided to separate at this time. Their primary focus and concern is for their son. We ask that you respect their privacy during this time.

Diggs is currently dating former pro cheerleader Amanza Smith Brown, while Menzel has no reported relationship. For more information on Menzel and her marriage to Diggs, check out the below link:

3. Ellen DeGeneres Has Cast Her In Her New Comedy

Ellen DeGeneres is helping produce a new half-hour comedy called Happy Time and Idina Menzel is set to star in it. Deadline reports:

Written by Randi Barnes (Legends Of Oz: Dorothy’s Return), Happy Time is described as a comedy about a woman (Menzel) in the public eye who’s ready to stop pretending she’s so damned happy all the time … The project, currently eyed as single-camera, is expected to be taken out in the summer.

4. Menzel Is Rooting For The Seahawks At the Super Bowl

At the official press conference for the Super Bowl, Menzel was asked who she’s rooting for – the New England Patriots or the Seattle Seahawks and her reply was this:

Yeah, because I’m a New-Yorker I cannot root for the Patriots. So I will root for Seattle.

Katy Perry is also rooting for the Seahawks as she says she’s good friends with quarterback Russell Wilson.

5. She Recently Appeared on the Show Glee

Menzel has a recurring role on the hit show Glee, which is in its final season. Menzel’s role on the show is Shelby Corcoran. This role actually led to a revival in Menzel’s career, putting her name out in the media and gaining younger fans, leading to a two-year tour and more acting roles for herself.

Read More
Celebrities, Idina Menzel, Super Bowl, Super Bowl 2015
Idina Menzel is the singer of the National Anthem at the 2015 Super Bowl. Check out the facts on Menzel's net worth, famous ex-husband Taye Diggs and more.