Idina Menzel is the singer of the National Anthem at the 2015 Super Bowl. Menzel is known as Broadway royalty, getting her biggest break in the musical "Rent," where she met ex-husband Taye Diggs. This past year, her divorce was finalized and she's had more success than her career ever has before. She's had a recurring role on the hit show Glee, her song “Let It Go” from the movie Frozen has sky-rocketed her to fame, and she has been performing all over the world.

Immediately after John Legend performed “America The Beautiful” tonight, Idina Menzel performed the National Anthem, wearing navy blue. She sang slowly and on-key. At one point, the camera cut to the troops over in Afghaniston and the U.S. Air Force Thunderbirds, making the crowd go wild. Menzel pulled off a flawless performance, ending with a cheerful exclamation of “Yes!” 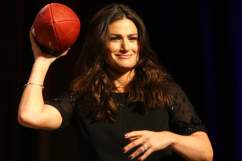