Kanye West and Kim Kardashian are one of the “it” couples that viewers have been waiting to see on the red carpet, especially with Kim’s recent hair cut. Even E! News’ Kelly Osbourne stated that she’s hoping they pull a Britney Spears and Justin Timberlake move with matching outfits. The two celebrated the Grammy Awards at some pre-Grammys bashes alongside Rihanna, Jay-Z and Beyonce and are ready for a huge event. West has two performances lined up – one solo performance and the other with Rihanna and Paul McCartney. Rihanna, Paul McCartney and Rihanna are set to perform their recent single “FourFiveSeconds.” For more information on that performance, check out the below link: 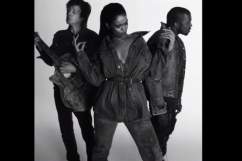 Kanye West is known for his crazy Grammys moments, particularly when he interrupted a young Taylor Swift’s win to announce that Beyonce should have won. Fortunately, we don’t foresee any of those kind of big moments tonight, but you never know … It is the Grammy Awards after all.