On the season 4 premiere of Catfish, a single mom named Miracle Hunt falls in love with a guy who claims to be “Javonni Santos” on Instagram. It turns out that Javonni is Kara and her husband Rickie Witherspoon. Read on for the facts.

1. Rickie’s Voice Was Used To Keep Up With Kara’s Story

Kara carried on the texts and online messages with Miracle, but when Miracle wanted to talk on the phone, she needed a man’s voice and that’s where her husband Rickie came in. He reluctantly helped and said that the situation had been going on for far too long. He just wanted it to all be over.

After the show, Rickie said it was all just a joke that went too far.

When Miracle was speaking with “Javonni,” he told her that his sister had Lupus disease. Kara says that she is the one who has the illness and sometimes she can’t even go outside. She says it’s been very difficult, feeling helpless and has put a strain on her marriage.

3. Miracle Hunt Was a Way For Kara To Experiment And Find More Attention

Click here to check out the 5 Fast Facts on Miracle Hunt.

Kara says she definitely developed a connection with Miracle and never experimented with women growing up because it was severely looked down on. She says that she was looking for attention she wasn’t getting at home and thought that Miracle was a sweet girl. The two ended up carrying on a great friendship after the show.

4. When The Catfish Crew Confronted The Couple, The Situation Became Hostile

To check out our 5 Fast Facts on Charlamagne, click here. (MTV/Instagram)

Nev Schulman, Miracle, and guest detective Charlamagne Tha God went to the Witherspoon’s home to meet who they thought would just be Rickie. However, it was both Rickie and Kara. The situation got heated and Kara called Miracle a “basic” chick. Even so, they meet up again and decide that they may have a friendship in the works.

Kara and Rickie Witherspoon are a married couple with children and Kara says it’s difficult for her when her children want to play outside and she can’t because of her Lupus. 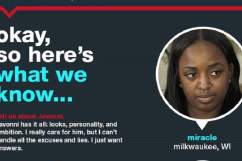