Katy Perry teamed up with domestic violence activist and survivor Brooke Axtell for her 2015 Grammys performance. Introduced by President Obama, Brooke Axtell introduced herself as a survivor of domestic abuse. She says she was bound to her attacker by a need to heal him. When he threatened to kill her, she escaped the relationship. Her mother convinced her to get help. After a powerful speech, Katy Perry appeared like an angel, completed covered in a white dress with an attached white cape to sing her song “By The Grace Of God.” Perry reportedly wrote the song when she had contemplated suicide.

For more information on Brooke Axtell, have a look at the below link: 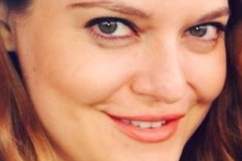 And for all the best red carpet pics of the night: