On tonight’s first episode of the back-to-back shows for Celebrity Apprentice, the celebrity eliminated was … Kenya Moore … and things got very dirty in the boardroom.

The episode begins with everyone meeting at the International Center of Photography. The team members left were Vivica Fox, Kenya Moore, and Geraldo Rivera on Team Vortez, while Ian Ziering, Johnny Damon, Brandi Glanville and Leeza Gibbons were on Team Infinity.
Kings Hawaiian bread company was the company this week and the task was to help people learn about the brand through photo-bombing mixed with original imagery of New York City. They also had to create hashtags to go with their photos. Don and Eric Trump were the advisors on this task and they were judging each team based on creativity, brand messaging and originality. Kenya Moore volunteered to be Project Manager and Johnny Damon was the Project Manager for his team.

On Damon’s team, Brandi Glanville came up with Kings Hawaiian: We Rise To The Occasion and Ian provides a helicopter to take amazing photos. Their hashtags are #RiseAbove, #CrowningMoment, and #NYHighRising. When Johnny’s team is working on the photos, Leeza stresses that they need to have the logos on photos to ensure that the branding aspect is on point.

Kenya Moore tells Vivica she wants to press the reset button and start fresh. Vivica agrees to her face but tells the camera she doesn’t buy it. Kenya’s idea is all about “big buns.” Geraldo tells Kenya she has the perfect butt for it and though she was a little uncomfortable at first, she agrees to do it. Vivica gets involved, but says she feels over-looked and not included. Kenya tells the cameras that the task could have easily been done without her. Later on, Vivica’s phone disappears while they’re working and she becomes worried because all of her contacts are on her phone.

Kenya’s team didn’t exactly have classic New York photos, so that definitely poses a problem. Their hashtags are #ILikeBigBuns, #BabiesLuvBuns, and #GirlsJustWannaHaveBuns. In the boardroom, Johnny Damon says Leeza Gibbons was his star, but the entire team was amazing. Kenya Moore bragged about Geraldo Rivera, but threw Vivica Fox under the bus. Overall, the executives loved all the images Damon’s team used, but they weren’t as thrilled with their hashtags. The executives hated most of Moore’s slogans and images, feeling they were way too provocative, so Damon’s team won.

When brought back in the boardroom, Vivica Fox tells Donald Trump that Moore is toxic. Geraldo Rivera tells Donald Trump that Kenya’s idea wasn’t well-received, but it was fresh and then he said Vivica Fox did very little to help with the task. Kenya Moore throws a low blow and says that Fox is going through menopause. Fox gets irate and says Moore is a dirty bitch. Trump ends up asking Moore why she is so nasty to everyone.

Moore says that Fox tweeted that she is menopausal and she denies it. Trump tells Moore that if it’s not true then she’s fired. Don Jr. looks it up and Fox indeed had a tweet about her going through menopause. Then, Vivica Fox brings up that she did not tweet that and that her phone was missing. She believes that after this tweet being “exposed”, Kenya Moore is behind the phone being stolen. Don Jr. says he finds it hard to believe Fox tweeted that and Rivera adds that it does sound highly suspect.

In the end, Kenya Moore was fired and was thought to be a thief. Moore tells Fox that she wishes her the best and Fox tells her, “I could care less. Bounce. Bye, Trick.”

If this wasn’t crazy enough, the biggest surprise tonight was in the second Celebrity Apprentice episode, where THREE people were fired. Check it all out in the below link: 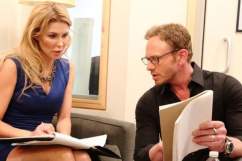