Mark McGrath is the subject of Twitter’s latest death hoax. He’s not dead.

1. It All Came From a Weird Press Release

Numerous media personalities on Twitter said that they had received a mysterious press release announcing his death. The press release mentions the show Hot Package on Adult Swim. McGrath is slated to appear in the show’s new season, which begins on February 27. The show is a spoof of entertainment magazine shows such as Entertainment Tonight.

2. A Rep for the Production Company for ‘Hot Package’ ‘Has No Information About This’

The show Hot Package is produced by a company called Abso Loutely Productions. Heavy.com spoke to someone there who when asked if McGrath had been shot dead on the set of one their shows replied, “No.” Then she said she hadn’t heard about the report. When we explained it to her, she cut me off and said “I have no information about…so keep trying.” The rep then abruptly hung up. You can watch a promo for the show, including McGrath’s “death,” above. The video shows a brief clip of McGrath lying lifeless, appearing to have been shot.

Sad to hear of the passing of Mark McGrath. Was a pioneer in the music industry in the late 90's. We will miss you, Mark. #RIPMarkMcgrath

4. McGrath Said On Twitter That He Knew Nothing About the Hoax

Final word on the death hoax thing, I knew nothing about it and found out the same time you did…sorry about any confusion

Around four hours after the press release first started circulating online, Mark McGrath tweeted the above statement where he apologized for the confusion.

The last activity on McGrath’s Twitter came 16 hours before the hoax appeared. He retweeted this:

Here he is, pictured a day before his “death”:

5. It’s Been Too Long Since the Last Twitter Death Hoax

This is the first Twitter-led death hoax since legendary actor Gene Hackman was proclaimed to be dead on the strength of a poorly worded Grantland headline on January 28. The piece was titled “The Greatest Living Actor at 85: Gene Hackman Is Gone But Still in Charge.” A rep for Hackman quickly confirmed the star was still alive. 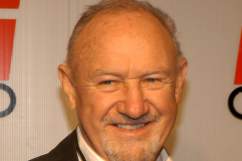 Gene Hackman Not Dead: 5 Fast Facts You Need to Know