Matt Rutler is the baby daddy and fiance of Christina Aguilera, who has rejoined The Voice for it’s eighth season. Read on for the facts on their relationship, Aguilera’s ex-husband, and their beautiful baby daughter.

1. Rutler Met Aguilera On the Set of her Movie Burlesque

Aguilera and Rutler met on the set of her 2010 film Burlesque. In addition to working on that film, Rutler has been a production assistant for films including The Proposal, Something Borrowed, The Town and The Social Network.

Matt Rutler and Aguilera welcomed a baby daughter named Summer Rain on August 16, 2014 via c-section. While pregnant, Aguilera was working on a new album and loving life while away from her job on The Voice. During her pregnancy, Aguilera also posed nude for V Magazine to embrace the beauty of motherhood, telling the magazine:

As a woman, I’m proud to embrace my body through all stages of life, staying fearless and confident in surrendering to the unknowns the future has in store.

In July 2014, Rutler accompanied his fiance to her baby shower in Los Angeles.

In Christina Aguilera’s music video “Let There Be Love,” her beloved Rutler makes a cameo appearance. You can also see her young son in it as well. Check out the video above.

In 2005, Aguilera married music marketing executive Jordan Bratman and the two welcomed son Max Liron Bratman in 2008. They divorced in 2011 and Us Weekly reported:

After Aguilera moved out of her Beverly Hills mansion she shared with Bratman, selling it for $11.5 million, she moved into a new Mulholland Estates mansion in Los Angeles with Rutler and Max, which she bought in April 2013 for $10 million.

5. He Was A Guitarist In the Nate Mott Band

Prior to getting engaged to Aguilera, the Jersey native Rutler was a member of the Nate Mott Band as ABC reported:

Aguilera isn’t the only person in the relationship that is involved in the music industry. Rutler played guitar for The Nate Mott Band, releasing a couple of music videos with the band before parting ways. The other members have created a new band, while Rutler is busy spending time with his new fianceé. 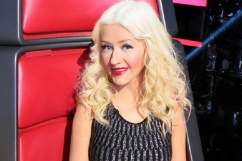 Christina Aguilera, ‘The Voice’ 2015: 5 Fast Facts You Need to Know