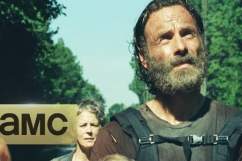 Check out all the highlights of the best moments that transpired during the 10th episode airing of The Walking Dead’s Season 5 run!

1. Three Survivors From the Group Scavenged for Food and Water

The 1st show we see is off Maggie crying by her lonesome in the woods. A zombie could be seen lurking behind her while she continued to weep. It got close enough to bite her, but got stuck in a group of vines. Maggie put the zombie out of its misery and went right back to her depressing state. We next saw a man digging into the ground.

Turns out it was Daryl, who dug out a worm for lunch. Sasha was next seen walking through a dirt trail looking for some sign of water to bottle up and drink. Maggie, Daryl and Sasha all managed to group back up. They went back out onto the road and noted that it would be a long while before they reached their destination.

2. Sasha Went on a Violent Rampage Against a Group of Zombies

Rick and a few survivors were forced to hop out of the truck since it broke down. Everyone decided to make their way down the long road. Rick told Daryl about his plans to find higher ground for everyone. Rick noted that it had been three weeks since the incident in Atlanta. Daryl seemingly ignored him and talked about how the baby and the group needed some food and water. Daryl went off on his own to get some supplies, but Carol went along with him anyways. Carl and Maggie shared a moment over a broken music box. Father Gabriel then spoke up and talked about his religious attire to Maggie. Gabriel offered Maggie a chance to speak with him about her problems, but Maggie didn’t seem too open to talking with him.

The group continued to make their weary crawl to a safer destination while a horde of the undead trailed behind them. Sasha and Michonne spoke along the way, which saw Sasha get gung-ho to kill the zombies behind them. Michonne was much more calmer and didn’t see any reason to waste any of the energy or supplies they had left. Daryl and Carol continued looking for food and water. Carol admitted that Beth saved her life back at the hospital. Carol passed along Beth’s knife to Daryl and noted that they’re still alive in this world. Carol told Daryl to let himself feel the sorrow that came from the death of Beth.

Rick and the survivors arrived at a certain part of the road. The zombies that walked behind them were closer to them as ever, which led to the group pushing them down the side of a bridge to the murky depths below. Sasha decided to cut down a zombie, which caused everyone to change plans to kill any leftover zombies. Michonne told Sasha to stop, which led Sasha to walk off angrily from their encounter.

3. A Pack of Vicious Dogs Ran Up on Rick and His Group

Rick and his crew spotted a row of abandoned cars. Daryl decided to go off on his own again in the woods. Maggie went into one of the cars to look for anything useful. She discovered the car keys, opened the car’s truck and came upon a now turned older woman who looked like she was kidnapped. The thumping that came from the truck forced Maggie to come back, but she struggled to unlock the truck this time. Maggie almost used her gun to crack open the trunk, but Glenn stopped her before she could do it. Glenn managed to re-open the trunk and went ahead to kill that zombie himself. Glenn and Maggie then went off together.

Daryl made his way through the woods and came upon the carcass of a rotten dear. He then spotted a dead walker right beside a tree. As the group sat and waited for the return of Daryl, the crackling of thunder could be heard rumbling in the sky above them. Daryl made his way back to the group. Everyone only seemed to find some booze. Things were calm until several vicious dogs came out to confront the group. Sasha went ahead and killed the dogs quickly, which led to Rick cooking them for the entire group to feast on.

Noah spoke to Sasha for a bit and told her that Tyreese tried to save him. Sasha told him not to think about things and just eat. The group continued to eat their dog meat nearby. Father Gabriel threw down the most potent piece to his religious wardrobe, which seemed to garner a curious reaction from Maggie.