As with any Netflix original series, House of Cards will be ripe for binge-watching because all 13 episodes will come out at once on Friday, February 27, 2015.

But while Netflix has announced the date, as per usual, they are pretty mum about the time the episodes will post on Netflix for people to begin to watch.

But luckily we have the past to draw on for the present.

Traditionally in the House of Cards series, episodes become available around 3 AM EST on the release date.

Parallel with the US launch, so about 12 clock noon. Regards, Thomas

12 o’clock noon Germany local time would be 6 AM EST in the U.S.

However, Netflix has purposely announced the wrong release time in the past to ease the burden on their servers. So if you’re waiting with bated breath about what happens next to Frank and Claire Underwood, boot up your Netflix around 3 AM on February 27 to see if tradition holds true. If it’s not posted yet, continue refreshing until it does. But you might have to wait until 6 AM.

Also be sure to check back here for a synopsis of every episode to make sure you caught everything when you start to watch. 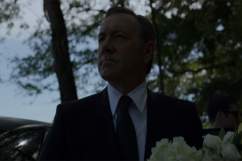