1. Bischoff Is Reported To Have Quit Her Job As a Fertility Nurse

So lucky to have the most rewarding job and to work with the best! #makinbabies @aparentivf

Bischoff’s job was a bit of a concern for Chris Soules. He saw how much she loved being a fertility nurse and how much the position meant to her, so he worried about her leaving that all behind to move to Arlington, a town of 500 people. According to The Inquistr, Bischoff has quit her job because her name has been removed from her company’s website as a member of the staff. Bischoff has worked as an In Vitro Fertilization (IVF) nurse coordinator at the Fertility Centers of Illinois for five years and you can check out the website for yourself by clicking here.

2. The Couple Whose Wedding They Crashed Is Invited To Their Wedding

For their first solo date, Bischoff and Soules decided to crash a wedding together. It was nerve-wracking, but a fun experience for the two of them. Soules revealed how the impromptu date got arranged, writing in his blog:

I loved Whitney’s spontaneity and the fact that she suggested we do it; it really showed me that she lives in the moment. What you didn’t see was us talking to the show’s producers. Nothing like this had ever been done before, and everybody was really hesitant to actually do it. They had to scramble to figure out logistics, how they were going to capture everything on camera and make it work. Thankfully they figured out a way to make it happen, and off we went to the mansion to change into our crashing clothes.

The best part of this is that Soules stated that the couple whose wedding they crashed will be invited to his wedding. Soules said:

I actually could not keep the story straight, and if it wasn’t for Whitney, we would have been found out and tossed out. She did a great job mingling and keeping our story in line. She’s so friendly, and everyone got along with her, and we totally tore it up on the dance floor and somehow never got made! That was a night I’ll never forget. As for Nick and Shannon, the couple whose wedding we crashed, thank you for allowing us to join you on your special day, even if we weren’t invited! I wish you nothing but a lifetime of happiness, and if I do end up getting married at the end of all this, you’re invited!

3. Bischoff’s Family Was An Issue For Soules

In my prime. #kybornandraised #gobabygo

Bischoff has no parents as her father wasn’t really in her life and her mother passed away about a decade ago. So, when Soules went on a hometown date with Bischoff, he met her uncle, grandmother, and sister. Because Bischoff was without a father, Soules asked her sister for permission to possibly propose to Bischoff. He told People:

I knew meeting Whitney’s family was going to be different, since she, sadly, doesn’t have parents. That’s why I had to ask her whom she would want me to ask for permission if I wanted to propose. Let me just say, that was a hard question to ask. I could have never predicted what happened with her sister, though. I knew how strong Whitney’s feelings were for me, and it caught me off guard that her sister refused to give her blessing. I totally understood her position, because this was a weird situation: a) she isn’t Whitney’s parent, and b) I was dating three other women. I would have loved to have received her blessing, but it didn’t affect my feelings for Whitney.

Bischoff’s sister did put a bit of a damper on things, but that didn’t stop the couple.

Another photo from @souleschris and Whitney's date in Des Moines! ?#TheBachelor

When Bischoff revealed to Soules that she had no parents, he was very impressed by her strength in overcoming that situation. Soules was also impressed at the way she handled tough questions dished out by his close friends. Soules stated:

They were really grilling her, and asking tough questions, and that girl handled it like a pro. She really amazed me with her poise and her honesty. That woman knocked it out of the park. 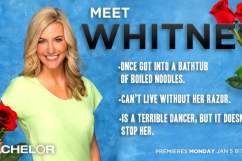 5. There Are Rumors That Soules Has Been Sneaking Around With Contestant Becca Tilley Since Filming

Will you accept this rose? ?#TheBachelor is new tomorrow!

Whitney Bischoff has been reported to be the winner this season, but there are some reports that it’s actually Becca Tilley. There are also reports that if Bischoff is indeed the winner, Soules has been cheating on her with Tilley. Here’s what Celeb Dirty Laundry had to say:

Do you think this rumor is true?

Read More
Chris Soules, Reality TV, The Bachelor, TV
Read on for the facts on Chris Soules and Whitney Bischoff from The Bachelor and check out some big spoilers.