There has been a lot of speculation as to who the next Bachelorette star would be for 2015 and we finally have an answer. When asking the audience which person should be the star, there were screams for both Britt Nilsson and Kaitlyn Bristowe. So what was the decision? BOTH!

Twenty-five guys will show up and have their choice of either Britt or Kaitlyn and who knows what will happen?! This is the first time in Bachelor history that more than one person will star in the franchise at once. But, it sounds like the male contestants on the show will vote on who they want.

Will the guys choose Kaitlyn or Britt? Post a photo with your prediction. #TeamKaitlyn or #TeamBritt?

Kaitlyn says the first time she heard the news of two Bachelorettes, she joked that “that’s not ideal.” But, she said that if that’s what it takes, she’s ready. After the announcement, the two showed up on Jimmy Kimmel Live to talk about battling it out on the upcoming season. They revealed that they don’t actually know what the rules are yet, so there wasn’t much they could tell viewers about what will go on. Kimmel then asked the two women if they’ll make out with each other during the season. Kaitlyn replied with an “Oh, Jimmy,” to which Kimmel said, “Is that a yes?” 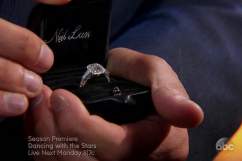 Read More
Reality TV, The Bachelorette, TV
Who is the next Bachelorette 2015? The answer is ... that it's going to be TWO women - Britt Nilsson & Kaitlyn Bristowe.