Hi? *post last night's intense game of heads up* (PS yes I have shorts on) (PSS I love being home and never want to leave)

Cassidy Wolf is a 5’7″ former beauty queen, who was crowned as Miss Teen USA 2013, and now she’s appearing on MTV’s show Catfish. Catfish reveals the truths and lies concerning online dating today. Because Wolf has suffered her own computer hacking incidents, she felt Catfish would be a great way to get involved in helping others. Plus, she was a fan of the show. Read on for the facts on Wolf’s cyber-stalker and her time on the show.

1. Wolf Was Hacked Through Her Webcam

Cassidy Wolf is actually a victim of cyber-stalking and blackmail. Wolf had unknowingly clicked on a link that gave a hacker access to her webcam and he had been spying on her for months. Wolf then became a victim of sextortion when she received an email from her stalker with photos of herself changing her clothes in her room. He said that if she didn’t Skype with him and do whatever he wanted, that he would release the photos to the public. Wolf contacted the FBI and she received justice.

2. Her Stalker Was a Former Classmate

Always end up frolicking around empty fields with @juliasponselphotography? come back into my life now plzzz

Wolf had suspected that a former high school classmate of hers, Jared James Abrahams, could be her stalker and she ended up being right. Abrahams surrendered to the FBI on September 26, 2013. Two months later, Abrahams pled guilty to hacking 100 – 150 other women, one of whom was 14 years old. He was sentenced to 18 months in federal prison on March 18, 2014.

For more information on Abrahams: 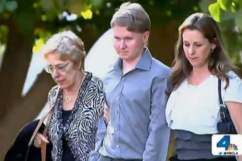 3. Catfish Was a Means to Understand Her Hacker

Being on the show Catfish was an exciting experience for Wolf, but it was also a way to better understand what made her hacker Abrahams think the way he did. The story on Wolf’d episode is that a girl named Courtney contacts the show about an online relationship with someone named Isaak. The strange part is that Courtney said she never contacted the show and believes that whoever Isaak is, was actually the one to contact the show.

Stoked to finally announce that I'll be co-hosting an episode of @MTV's #Catfish with @Nevschulman. Season premiere is Wednesday, Feb. 25th! I'll update you guys when the episode airs. Can't wait for you all to see it… Quite interesting to say the least. ? #MTVCatfish #ChristmasCardPhoto? ? ? by @jdetarsio

Wolf suffered from online harassment prior to receiving the title of Miss Teen USA, so she made it a point to start a campaign against cyber crimes, traveling to schools across the country, speaking about how to protect yourself from hackers. Wolf previously told Today:

I wasn’t aware that somebody was watching me (on my webcam). The light (on the camera) didn’t even go on, so I had no idea. This all happened before I had a title. I was just a normal girl in high school … This next year I’m just so excited to be able to share my story and raise awareness in young teens about what can happen.

5. In Addition to Battling Cyber Crime, Wolf Participates In Other Causes As Well

There are several good causes and charities that Wolf is involved with, including Steps4Paws, The Gentle Barn, Best Buddies, San Diego Youth at Risk and KAR Dancer Against Cancer.

Read More
Cassidy Wolf, Catfish, Celebrities, Miss Teen USA, Reality TV, TV
Cassidy Wolf is a former Miss Teen USA who is appearing on MTV's Catfish to heal from her own cyber-stalking situation. Read on for the facts.