Chris Soules is reportedly ready for a debut on the 20th season of Dancing With The Stars as a 2015 contestant and it’s said that the official announcement will come on The Bachelor After The Final Rose special, but it could also happen on Good Morning America where Soules is scheduled to appear in the morning. When the cast of the season was announced on Good Morning America, show host Tom Bergeron gave a hint as to who pro dancer Witney Carson’s partner is and he said that the contestant was unable to “rose to the occasion” that morning. People Magazine reported that:

Right after he snags a bride, Chris Soules is going to go after a mirror-ball trophy. PEOPLE has confirmed that Chris Soules will become the 12th celebrity on the 20th season of Dancing with the Stars. He is expected to partner with Witney Carson, the reigning champion.

A source told Us Weekly:

He seems like he’s not totally sure what he’s getting himself into! It will be fascinating to see how well he does.

Former Bachelor cast members to dance their way into the DWTS ballroom include Sean Lowe, Jake Pavelka, and Melissa Rycroft. 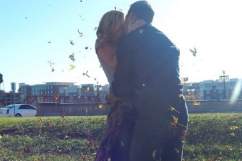 Chris Soules’ Winner: Is ‘The Bachelor’ Engaged & to Whom?

Read More
Dancing With The Stars, DWTS, Reality TV, TV
Chris Soules is set to be a 2015 contestant on Dancing With the Stars according to reports and some spoilers from DWTS host Tom Bergeron.