A man in New Mexico is accused of throwing a banana peel at comedian Dave Chappelle during a show. That suspect has been named as Christian Englander by police in Santa Fe. You can listen to the incident unfold above.

1. Cops Say He Admitted to Throwing the Banana

TMZ reports that when Englander was arrested, he was “wasted” and that he admitted to throwing the banana peel. Englander has been booked on charges of battery and disorderly conduct.

2. Chappelle Had Been Ripping Into Englander’s Friend

Police in Santa Fe say that Englander wasn’t happy with Chappelle making fun of his friend, reports KRQE. The friend had been drawing during the show, when Chappelle pointed this out, the comedian proceeded to rip Englander’s pal.

3. Englander Was Thrown Out of the Show

The show was on March 30, after the incident he was thrown out of the show. The Associated Press reports that as of March 31, Englander is still in jail in Santa Fe. You can read his full criminal complaint above.

4. Chappelle Famously Doesn’t Always Get Along With His Audiences

It’s not the first time that Chappelle has had trouble with audiences. In 2013 at a show in Hartford, Connecticut, he stopped his routine due to heckling. You can watch video of that incident here. In August 2014, the Hartford Courant reported that Chappelle returned to the city and made an apology saying, “I did not think I would ever come back to Hartford again,” Chappelle said to a roaring crowd. “It was a year ago tonight, I had 364 nights to think about that fatal night, one year ago. … I was really immature about what happened.”

5. Banana Peel Throwing Has Been Rife at European Soccer in Recent Years

In Europe, the throwing of bananas has become synonymous with racist soccer fans. Many fans, specifically in Italy, Spain and across Eastern Europe, have had instances where bananas have been thrown at black soccer players. 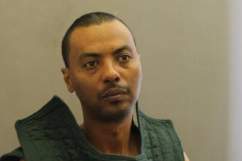