NEW TIME! 8pm/7c Coco Jack is on @sharktankabc Tonight! Watch #SharkTank on ABC at 8pm/7c. Would anyone care to make a prediction?

Coco Jack, a tool that assists in the opening of coconuts, debuted on Shark Tank on March 6. Inventor Dave Goodman pitched to the sharks. He is a musician who got burnt out and started working on a farm that included coconuts, and the rest is history.

“I quickly realized that one bad stroke with a cleaver while opening these coconuts could end my career as a musician,” he told Entrepreneur.

After almost 10 years of perfecting the prototype, he began selling the jack and mallet in December of 2013. The stainless steel designed jack, which is patent pending, cuts a circular lid into the top of the fruit in six seconds. The plastic mallet aids in hammering the Coco Jack into the fruit. Keep in mind that it is only used on Young Thai Coconuts, not brown, mature or hairy types.

Watch the video below to see how the process works: 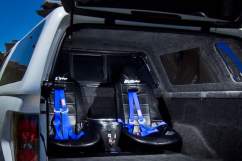