Courteney's is ready, are you? All new episode starts TONIGHT at 10:30/9:30c on @tbsveryfunny! #OneLastPour ??

It’s the series finale of Cougar Town, which is in its 6th season, and there are some past cast members in the mix. The finale episode is titled “Mary Jane’s Last Dance” and the official synopsis reads:

Grayson tries to prevent Jules from running her own birthday, but it proves difficult when everyone experiences major life changes.

The finale airs at 10:30 p.m. EST on TBS and TV Guide reveals that the episode celebrates Jules’ (Courteney Cox) birthday, which brings Bobby Cobb (Brian Van Holt) back on board, thanks to Andy’s (Ian Gomez) tablet. Jules’ happiness about the surprise of him coming back ends when someone reveals to Jules his or her plan to leave for good.

Cougar Town co-creator Bill Lawrence sat down with ABC40 and talked about the show ending, admitting that:

Not to be cavalier, but it doesn’t feel like a big sad end because I’ve worked with the same people for 20 years. It’s the same crew and a lot of the same cast members and friends across shows, so the shocking thing now in my career is I guess I’ve gotten to a place [where] I really try to only work with friends and people I want to be around a long time. The show ended a couple months ago and we still all hang out and see each other. I saw Courteney last week. I still see some of the same crew members on the pilots we’re working on now.

We're shooting our last episode of @CougarTownTBS this week. I honestly can't believe in 5 days it will be over. pic.twitter.com/UrwH1kPdpm

And, as far as what Lawrence had in mind for the ending, he explains:

We always knew we were burdened by the fact that you’re doing a show that’s about adult friendships, to have people undergo massive changes would have been TV fraudulent. It’s not like the Friends finale where you can go, “This couple is getting married and moving to the suburbs, and this couple is having a baby.” These people are all in their 40s and it’s a show about [whiling] away the time drinking wine with your friends. That led us very quickly to the idea to kind of, not poke fun at, but head-fake as to what finales usually are, which is the dissolution of a group. Instead, we lean into the fact that for nerdy fans of this show, I would assume that they would want to think that everybody was still hanging out outside drinking wine everyday, just like the rest of us are in real life. 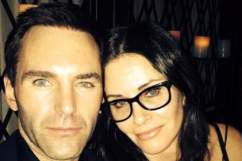 Read More
Celebrities, TV
After 6 seasons, Cougar Town is saying goodbye in a series finale. Read on for spoilers on how things may end, plus cast details.