On episode 4 of Catfish, season 4, we have the story of Daisy and Marcus. Daisy hails from Indian Trail, North Carolina and wants to meet her online love Marcus. The official episode synopsis for the episode reads: After helping with troubles at home, a man refuses to speak to his love interest on the phone. Read on for the facts and what we know about the episode below.

A 22-year-old girl named Daisy says she met a guy named “Marcus” on Instagram, early in the summer of 2012. She says that she was attracted to his looks and followed him online. He then followed her back and asked for her phone number. Since talking together, Daisy has bought Marcus a $2,000 camera and also sent him cash on one occasion.

2. Marcus Has Gotten Daisy Through Several Tragedies In Her Life

There will be tears tomorrow night. Brace yourselves for an emotional episode of #Catfish. pic.twitter.com/bbIPKWv5d6

Daisy says she really feels complete with Marcus in her life and that he’s helped her get through tough times as she’s been plagued by tragedy. In turn, Daisy believed that Marcus is the one for her.

Daisy’s senior year of high school, her sister died tragically in a car accident. Then, Daisy was dating a girl and her family was not thrilled about it to say the least. Schulman says that her father passed away and that her family even blamed her for his death. Daisy had a lot of trust issues with her family because when she was going to pick up her girlfriend at the time, her father died suddenly and the blame was put on her.

To check out Catfish episodes instantly, via Instant Video on Amazon click here

3. Tyler Oakley Is the Guest Detective for this Episode

Throughout the season, there have been “guest detectives” temporarily taking the place of Nev Schulman’s co-host Max Joseph. For this episode, YouTube sensation, Tumblr Addict and Podcast host Tyler Oakley is the guest host and he’s very excited. This is a very big episode for Catfish because Oakley has an insanely large following with 3.87 million Twitter followers, 3.7 million followers on Instagram, and over 6.6 million subscribers on YouTube.

Oakley is openly gay and is a former member of the channel “5AwesomeGays”, having branched out to become a success on his own. He’s an advocate for LGBT youth, suicide prevention and gay rights, among many other causes.

Oakley says his inspiration in life is Ellen DeGeneres, explaining that:

She embodies what I want my experience to be and my influence to be, where it’s a positive one, it’s a happy one, it’s not something about the bad parts of life or the downsides of a lot of things. She’s using her influence for good, and everyone knows who she is, what she stands for, and that she is a lesbian. 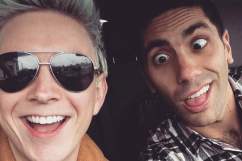 4. Daisy Has Never Spoken to Marcus on the Phone

When Tyler Oakley hears that Daisy has never even talked to Marcus on the phone, he immediately feels that that’s a red flag. Co-host Nev Schulman says that he and his friend Max’s general theory on this kind of situation is that the person usually turns out to be a girl. Daisy stated that she and Marcus text every day but he will never pick up the phone if she calls.

Upon hearing from Nev Schulman, Marcus is reluctant to meet up with Daisy, especially since he will be on television. Nonetheless, he shows up and it’s actually him. Marcus shows up with his cousin Julius.

Marcus lives in Cincinnati, while Daisy resides in North Carolina and Daisy says that Marcus works with film and video production. Prior to the episode, Marcus had refused to meet or answer questions, but upon meeting Marcus, Daisy found out he was exactly who she thought he was … but he was just a little shy.