So grateful to have known Carol Ann Susi who brought laughter & light with her always. She'll forever be in my heart. http://t.co/ecSsW7buPQ

Carol Ann Susi, the actress who voiced Howard Wolowitz’s mother, Debbie, passed away in November from cancer. On February’s episode “The Comic Book Regeneration,” Howard got the news that she had taken a nap and never woken up.

It was decided that there will not be a funeral for her on the show, instead they are honoring her in creative ways. Executive producer Steve Molaro told The Hollywood Reporter, “There will not be a funeral episode. This is so tricky for us and for the tone of the show to not let things get too dramatic and too sad. The way we handled it enabled us to deal with it and also jump over a funeral-type episode. But we will certainly continue to deal with — Wolowitz and Bernadette in particular —with the fallout of her passing away for a number of episodes down the line.

On tonight’s episode, “The Leftover Thermalization,” the crew will enjoy one of the dinners she had prepared after the freezer breaks in her home. Celebrate the life of an actress that will truly be missed, but whose memory will live on, with these insights into her life.

1. She Was Never Seen on Camera

Watch the montage above to see some of her best moments on the show. Fans did get a glimpse of her dress at Howard and Bernadette’s wedding from a Google Earth satellite picture.

After that sneak peek, when viewers were questioning the future of her appearance, Molaro told The Hollywood Reporter, “The glimpse on the rooftop is all you’re going to get for now. Isn’t she better left to the imagination? There are no plans to actually see her on camera and I think it’s probably better that way.”

From early on, she knew she would not be featured on screen in the role of Howie’s mother.
In an interview with The Plain Dealer, she explained the conversation she had with Chuck Lorre, the show’s executive producer, “He said, ‘You don’t mind not seeing the hair and makeup people for the next 10 years?’ And I said, ‘Not at all, as long as I get paid.’

It didn’t matter to the veteran sitcom actress that she would not appear on screen. “It didn’t bother me that they’d never show Howard’s mother,” Susi continued. “I absolutely didn’t care. A job’s a job. You just go in wanting to get the job, so I read for the casting director. They called me back. I read for the producers, and that was it.”

2. She Was Loved By the Cast

She passed away at 62 after a brief battle with cancer. At that time, the producers made this statement, praising the actress for her talent as well as her sweet personality:

Unseen by viewers, the Mrs. Wolowitz character became a bit of a mystery throughout the show’s eight seasons. What was not a mystery, however, was Carol Ann’s immense talent and comedic timing, which were on display during each unforgettable appearance. In addition to her talent, Carol Ann was a constant source of joy and kindness to all. Our thoughts and deepest condolences are with her family during this time, and we will miss her greatly.

The actress did spend a lot of time with the cast, and was on set whenever she was on the show. “I’m there at every rehearsal and shooting for every episode I’m in. I’m on set, speaking the lines when we’re taping. It’s a theatrical job. It’s not a voice-over job. I’m right there with them. And it’s a great place to be,” she told The Plain Dealer.

Melissa Rauch sent the tweet with her picture at the beginning of this article, at the time of her passing. Kunal Nayyar talked about her “lovely smile” and the fact that “her spirit will live with us on set forever,” in his interview on the Ellen Show below. He also mentioned that she never drove, and instead rode the bus to Warner Brothers to film the show. 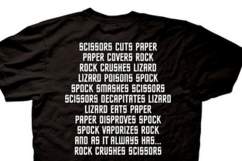 ‘The Big Bang Theory’ T-Shirts: Top 5 to Buy on Amazon

3. She Didn’t Know How the Voice Came About

When The Plain Dealer asked her how Mrs. Wolowitz’s voice began, she said, “I really don’t know. It just hit me that they wanted someone who was screaming at him all the time, so that’s what I did. So what’s not to be fun about this? It’s a great job. Are you kidding? I have a ball.”

Rauch, who plays her daughter-in-law, has come close to mastering the nagging voice. When asked if Rauch was ever considered to play Debbie, Molaro said, “She does and that’s true, but I don’t think any of us could bring ourselves to do it.” Watch her use it in the interview below at Comic Con.

4. She Was from New York & of Italian Descent

According to her imdb page, she went to school for acting at HB Studio in Manhattan and moved to L.A. in the 70s.

Although she was best known for her role on Big Bang, she appeared on episodes of Cheers, Mad About You, Just Shoot Me and Seinfeld. Watch the clip above from Grey’s Anatomy, where she plays a hospital patient.

At the time of her death, she was not married, and the New York Times reported that she was survived by her brother, Michael.

5. She Will Be in Every Episode

The crew and cast will honor Susi by having her picture permanently on the refrigerator in Leonard and Sheldon’s apartment. Molaro told the Hollywood Reporter:

After we had that impromptu memorial the morning she passed away, Johnny and I were hugging — like everybody was — and right then we found our prop person and asked to get a little picture of Carol Ann and we put it on the refrigerator [in Leonard and Sheldon’s kitchen] so she’s there in every episode now. It’s so small you wouldn’t even see it, but on the fridge is this tiny little wallet-size picture of Carol Ann that’s been there since the day she passed away.