Joe Giudice doesn’t have a flattering track record when it comes to cheating allegations in the media and the latest report is that he’s cheated on his jailed wife Teresa with a blonde woman named Jamie Jackson. Read on for the details on Jackson and the reported affair. 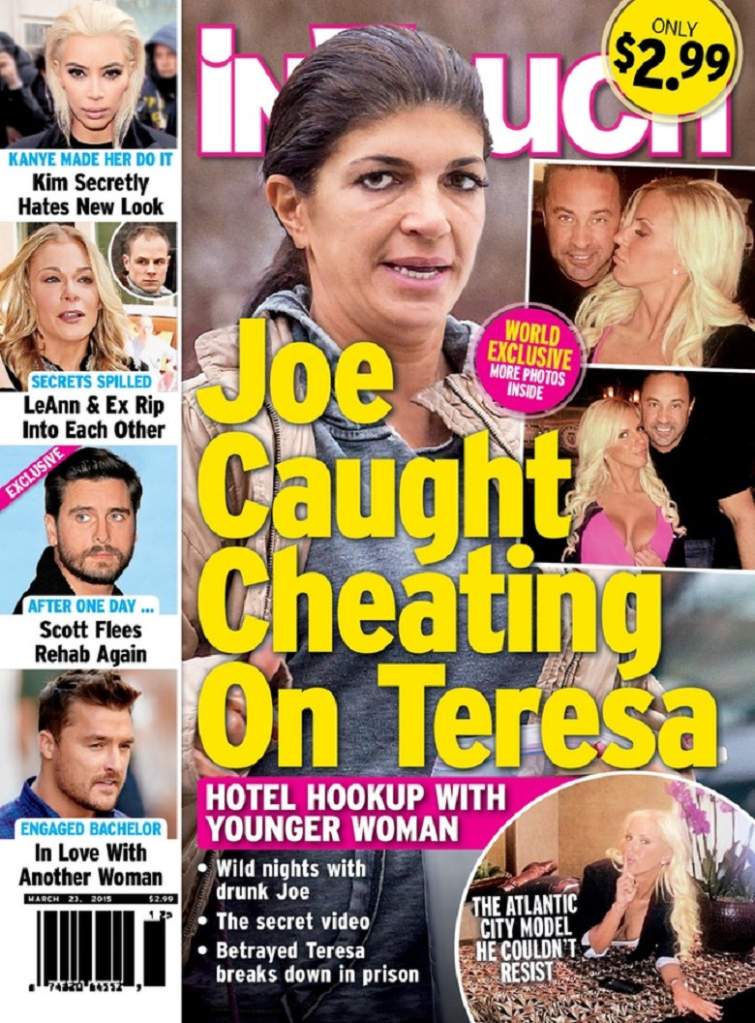 According to Radar Online, Jackson and Giudice met via a mutual friend over lunch and Joe “really liked her.” It was reportedly a three-hour meal in Newark, New Jersey and a source told Radar that it started off as business, explaining:

The idea was that Joe was setting up events for a wine label, but clearly he was there to have fun, not do business. Jamie and two of her fellow models were approached about working a wine event for Joe.

Another source had a different story when speaking with E! News, saying nothing happened between Giudice and Jackson. This source stated:

Joe was in Atlantic City for a meeting about getting a wine that he’s involved with into one of the casinos. He was also there to discuss a potential appearance with Teresa for later that month before she surrendered. Jamie, the woman in question, was there because she’s a model who was hired by the wine company to do promotional work.

In Touch Weekly states that Jackson is a 30-year-old party girl, model and dancer at Boogie Nights, an Atlantic City nightclub.

2. Giudice and Jackson Were Spotted Making Out in Atlantic City

In Touch Weekly has stated that Giudice and Jackson were seen “full-on making out” in the Tropicana hotel. A witness revealed that:

They were chugging margaritas and seemed drunk out of their minds … Joe and Jamie went back to the room and things got crazy.

Joe and Jamie wet into the master suite of the room, the insider said, and “20 minutes later, Jamie came out of their bedroom buttoning her blouse and crying hysterically,” while Joe “popped open a bottle of wine like nothing happened.”

In addition, a source told Radar:

Joe posed for at least one photo with Jamie while she was topless… he didn’t seem to care! Jamie was all over Joe, wrapped around him like a panda bear.

The Atlantic City incident reportedly went down when Teresa Giudice was still at home, preparing for prison.

In Touch Weekly contacted Giudice about the alleged affair with Jackson and he initially denied knowing her. In Touch writes:

When reached for comment by ‘In Touch’ on March 9, Joe initially denied knowing Jamie, stating, “I have no idea who you’re talking about,” before eventually admitting she was “with a friend of mine. Maybe I had an arm around her [at Carmine’s].” When asked to explain why there are photos of him with Jamie inside a Resorts hotel room, he replied, “Um, we were at a business meeting.”

Jackson at first told In Touch that she had no comment. She then opened up to Us Weekly saying:

I definitely never slept with him…Nothing happened with me and Joe … nothing inappropriate happened at any time. We did not hook up, kiss, or anything more. I saw him at the two business meals and nothing more, it’s all made up bullshit.

When the story broke about Giudice’s alleged affair, he stated:

I did not flirt with her. I did not make out with her, nothing happened between us. Everything In Touch is saying that happened between us are lies … I guarantee you that nothing happened. They said they have a video of me in a bedroom? What are they talking about? They said I’ve been with this girl more than one time, it’s not true. I met this girl twice and nothing went on.

4. On the ‘Real Housewives of New Jersey’, Guidice Appeared to Be Having a Phone Conversation With Someone Viewers Believed to Be a Mistress

A very suspicious scene aired on the Real Housewives of New Jersey where Joe was on the phone with someone who seemed to be saying something sexual. At least, that’s how it appeared. Many viewers believe the person on the phone was a mistress of Joe’s. However, Joe and Teresa insist that the call was just for work.

This wasn’t the only time that cheating allegations came out on the show. Jacqueline Laurita stated during a reunion show that Teresa Giudice had come to her in the past saying that she had caught Joe cheating. Laurita brought up news about a babysitter and a secretary.

As far as how Teresa’s family feels about Joe, a family source tells Radar Online:

Everyone has been through this before and knows how sneaky and shady Joe can be so of course we don’t trust him. But at the end of the day, it’s Teresa’s problem.

5. According to a Family Friend, Teresa Giudice Will No Longer Tolerate Cheating Accusations

An insider said that Teresa has remained “old-school” in the past, sticking by her husband through all the cheating accusations, but being behind bars may give her a different perspective. The insider revealed:

The distance she has had from him in prison gives her a new perspective. She sees Joe more clearly and she won’t tolerate this infidelity. She knew he wouldn’t stay faithful and she’s even broken down about it while writing in her diary. Teresa endlessly denies Joe’s cheating whenever she’s asked, but behind closed doors, she admits how painful it’s been to constantly fear he’ll cheat.

According to a source, Joe Giudice’s alleged affair with Jackson occurred twice, not once, telling Radar Online:

Jamie met up with Joe for another date, and this time she brought a friend. Joe was back in Atlantic City with a friend of his, and Jamie went over to meet them. Jamie said she and Joe had oral sex with each other, and Jamie’s friend had sex with Joe’s friend.