Miss Teen USA 2013 Cassidy Wolf was a victim of computer hacking and sextortion by a former high school classmate named Jared James Abrahams. Wolf had said that she hadn’t interacted with Abrahams prior to the incident, but had seen him in the hallways at school. Wolf had first been alerted by Facebook that someone was trying to hack into her account. She then realized someone had hacked her computer’s webcam and had been watching her for months, taking numerous scandalous photos of her in her own private bedroom. Abrahams attempted to blackmail Wolf via email. View the message in the below photo.

Abrahams turned himself into the FBI and admitted that he had done the same thing to 100-150 other victims, one of whom was a 14-year-old girl. He was sentenced to 18 months in federal prison. Have a look at the official complaint on Abrahams below and to view the entire 22-page complaint by clicking here.

The computer science student pleaded guilty to three counts of extortion and one count of unauthorized access of a computer. 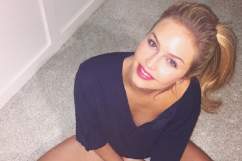 Read More
Cassidy Wolf, Celebrities
Cassidy Wolf is appearing on Catfish and brings up her past of being blackmailed by a webcam computer hacker named Jared James Abrahams.