My very first dinner party at my house and I couldn't be more thrilled!!!! I couldn't have done it without the incredibly talented @jeffleatham!! You are a flower legend to say the least. #HappyThanksgiving So beyond blessed

In March 2014, Khloe Kardashian bought Justin Bieber’s house in Calabasas, California. This is the same house that police raided after Bieber’s egging his neighbor’s house. Kardashian previously sold her Tarzana mansion that she shared with estranged husband Lamar Odom to Big Bang Theory actress Kaley Cuoco for $5.49 million. TMZ reports that Khloe purchased the former home of the Biebs for $7.2 million after Bieber had purchased it for $6 million in 2012, but with a net worth of $20 million, Khloe can afford it. The home sits in the private, gated community of The Oaks and Khloe’s sister Kourtney purchased the neighboring home of Keyshawn Johnson, who was a nemesis of Bieber’s as well.

After purchasing the home, Khloe did a ton of remodeling, which viewers got a glimpse of on TV. As of Fall 2014, Khloe finished her renovations and hosted her first Thanksgiving in November 2014. Check out all the Instagram posts and Twit pics from Khloe’s new home below.

We would have loved to have been at @KhloeKardashian house for #ThanksGiving #Wow #SoPretty #Kardashian pic.twitter.com/WTl0FtYM2U

May your days be painted in gold. May your life be filled with diamonds. May the stars shine bright on your world. May your new year have more magic and spark than the last. May God continue to bless you in abundance! Happy New Year Angels!! ⭐️⭐️⭐️ 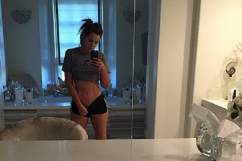