This is all that matters. This is my life, my everything. ❤️

Lisa Rinna joined the Real Housewives of Beverly Hills and has been a calming force for the most part. She’s beautiful, fun and always has good intentions. Unfortunately, sometimes those good intentions don’t lead her in the best direction, as she’s found out with cast-mate Kim Richards, who brings Rinna’s husband Harry Hamlin into the mix. On an episode of RHOBH, Kim Richards is upset with Rinna who was showing concern about the status of her sobriety. While Rinna tried to mend the situation, Richards hit below the belt and implied that Rinna’s husband was cheating on her. A usually put together Rinna responded angrily and threw a drink in Richards’ face. When talking about the altercation, Rinna told People:

If you poke a hornet’s nest, you are going to get stung … I am fiercely protective of my family.

When Lisa Rinna appeared on Live! With Kelly and Michael, she revealed that her husband had said he would divorce her if she joined the show. Rinna explained: This is a true story. I went to Harry and said I’m thinking about [doing RHOBH] and he looked at me and said, ‘If you do this show, I will divorce you.’ And I said, ‘Okay,’ and I walked away and I was done with it … [He said], ‘I’ve thought about this, and I actually think it may be a good idea for you to do it.’So if Harry says okay then you can do it!

Rinna and Hamlin have been together over 17 years and have two daughters. There have been no reports of Hamlin cheating on Rinna, though he does have a little bit of a scandalous past in that area. Hamlin was previously married to Laura Johnson and Nicollete Sheridan and those two relationships reportedly overlapped. Johnson had talked to People about Hamlin’s alleged infidelity:

The final straw came on Jan. 8, she alleges, when she discovered that Sheridan had been in her bedroom, bath and closets while she was out of town. “When I confronted Harry about this,” she says, “he said, ‘I have no control over Nicollette when she is in this house. If she wants to go into your bedroom, I can’t stop her.’ ” Instead of attempting “to calm me down … Harry even took out a tape recorder to try to record my emotional breakdown.”

For more on Rinna and Hamlin: 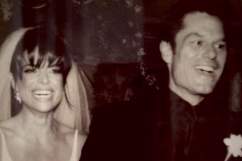 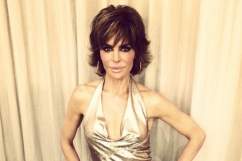 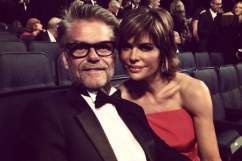 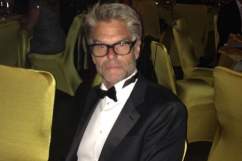 Read More
Celebrities, Harry Hamlin, Lisa Rinna, Reality TV, TV
Lisa Rinna and Harry Hamlin are on the Real Housewives of Beverly Hills and have to deal with cheating rumors. Read on for the facts.