Michelle Beadle is the host of ESPN's SportsNation weekdays at 3 p.m. on ESPN2. Beadle was previously the host of SportsNation from 2009-12 with Colin Cowherd. She later returned to ESPN in March 2014 and has since been a regular hosting the daytime show again with Max Kellerman.

She has previously worked for the YES Network (left in 2009) and NBC Sports. While at NBC from 2012-14, she anchored coverage -- mostly on the NBC Sports Network -- for the 2012 Summer Olympics in London, the Triple Crown (horse racing) and NFL Kickoff 2012. She was also the host of Access Hollywood.

Beadle grew up in Texas, and is a die-hard San Antonio Spurs fan; she also LOVES professional wrestling and the WWE -- although there was controversy involving an incident with herself, C.M. Punk (real name: Phil Brooks) and his wife, current WWE Diva, A.J. Lee.

The following images of Beadle used in this slideshow are Getty images. 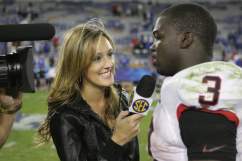 Katie Nolan Photos: The Pictures You Need to See

Read More
Breaking News, ESPN, TV
Michelle Beadle is the host of ESPN's SportsNation weekdays at 3 p.m. on ESPN2. She has previously worked for the YES Network and NBC Sports Network.