As “the nice one” on Shark Tank, Robert Herjavec has traded in his business cards for dancing shoes. This season, in addition to the Tank, he can be found in the Dancing with the Stars’ rehearsal studios with his partner, Kym Johnson.

There has been much speculation that the two are an item. Here’s what we know about their fun and flirty relationship.

1. They Were Caught Kissing

On March 18, TMZ reported, “Herjavec and Johnson met mid-February right before the DWTS cast was announced … and we’re told they started dating immediately.”

In the video clip above, they are caught kissing with their arms around one another. When TMZ asks if this is all a publicity stunt, Herjevec said, “We’re great friends; it’s an incredible experience to go through.”

People magazine asked Herjavec if the PDA was just for the cameras, to which he replied, “I don’t do anything for publicity. From the moment I met her, I love hanging out with her. We are having a great time.”

2. There Was Instant Chemistry

“From the moment I met [Kym], we got along great. This is a very scary experience for me, and it’s great to have somebody like Kym to go through it with,” he gushed to US Weekly.

A source told Us Weekly, “Kym and Robert were definitely attracted to each other from the get-go. They are constantly all over each other. She can’t stop talking about what a good, nice guy he is. They have insane chemistry and are actually a great match.”

Watch the clip above, from the first week of the competition, where the duo danced the Cha Cha to “Bills” by Lunch Money Lewis.

On the dance floor, Herjevec literally can’t stay away from Johnson. During a backstage interview, Fox News reported that he said, “I dropped my frame. It’s hard to stay away from Kym. I just want to get close to her but in the dance, it’s ‘stay away.’”

Who's getting excited about the premiere of @dancingabc ? I know @robertherjavec and I are!!!

Herjevec was married to Diane Please and the two shared a home in Canada together with their three children. On March 3, he made a statement to TMZ saying that they are legally separated, awaiting divorce. “Human relationships are so difficult. I wish nothing but love and peace for our family as we move forward from this,” he said.

Things got so bad for him that he even contemplated committing suicide because of his situation. “I just wanted to end it,” he told People. “It’s been a terribly difficult year,” he added “We were great parents and a great team, but over time we drifted apart.”

On the day that the news of the separation emerged, Herjavec tweeted this picture of him and Johnson on his private jet:

4. Kym Dated a ‘DWTS’ Costar Before

Before joining the American version of the show, Johnson, an Australian native, competed on Dancing the Stars Australia.
In 2005, she won with partner Tom Williams, a TV presenter. At the time, she was engaged to cricketer Shane Watson, but ended it and start dating Williams.

The DWTS judges definitely see the chemistry Johnson has with her newest costar. After one of their performances, Carrie Ann Inaba said, “You guys are like a fairytale. It almost made me nauseous because you’re so darn cute.” 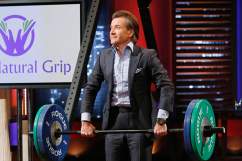 ‘Shark Tank’ Products on March 27 Rerun: Facts on the Companies

In 2007, Johnson danced with another Shark, Mark Cuban, just weeks after he got a hip replacement. Watch the two dance the foxtrot in the clip above.

In a behind-the-scenes video, Johnson said that her partner over-analyzed his dance moves most of the time:

Mark thinks way too much. He’s a super intelligent man and he writes everything down. That’s the way his mind works…But with dancing you need to fell everything. And he has to let himself go.

Of the experience, Cuban told Tech Crunch, “It was just a challenge. It was something I didn’t know how to do, it was live, and it was athletic. And on top of that, I had just got my hip replaced. So I could either go through rehab or go dancing with my wife Kim.”