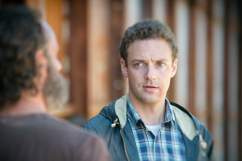 Check out all the highlights of the best moments that transpired during the 13th episode airing of The Walking Dead’s Season 5 run!

1. Sasha Went Outside Alexandria’s Walls to Try Out Some Target Practice

The show opened with Sasha staring at a litany of home photos while she tried to fall asleep. When the sun came back up, Sasha went into a building to speak with her new job overseer Olivia. Sasha was sent out hunting, so she retrieved a few weapons to bring along with her. While outside Alexandria’s gates, she performed some target practice on the photos she was staring at the night before.

During her target practice, Sasha seemed to be weary of someone or something watching her. Sasha then went on a shooting spree while the sounds of zombies screaming seemed to go on inside her head. Sasha then sat down on a stoop and uttered the words “Come and get me.”

2. A Welcoming Party Was Planned for Rick and His Group

Two dead zombies could be seen on the ground as Rick, Carol and Daryl talked nearby. They all went over their plans to stay weary of their new home and its people. They discussed the community and how they wanted the rest of their group to at least try to make good with the people there. A zombie started tailing them, which led to Carol shooting it to death. After killing that one walker, Daryl discovered a zombie with the skin on its jaw ripped off.

Back inside Alexandria, Michonne put on a security uniform and tried out her new set of clothes. They discussed their new roles, as well as what they perceived to be Deanna’s end game with the both of them. Back in the forest, Daryl found out that Aaron was following him. Daryl questioned his cause for following him, but Aaron admitted to him that he was just hunting for food. Inside Deanna’s home, she went over the roles that both Rick and Michonne would handle. Maggie was also noted by her as being the one to help her run a government in Alexandria someday.

Rick and everyone took a walk outside to discuss what was needed to secure the walls of Alexandria. Deanna wasn’t so sure that her people needed more weapons. Sasha came up to them to offer her services as a lookout, but Deanna declined. This worried them all, but Deanna eventually considered Spencer to be the lookout for now. She promised to give Sasha’s request more consideration once she did something for her. A welcoming party was planned by Deanna for Rick and his group. Carol could be seen conversing with her new neighbors about the upcoming party. She caught up with Rick and spoke about their plans for the evening and Daryl.

3. Daryl and Aaron Spotted a Friendly Animal in the Woods

Daryl and Aaron continued hunting in the wood. They eventually spotted a lone horse, who Aaron went on say was named “Buttons.” Daryl made it known that he would try and capture the horse instead of killing it for food. Daryl slowly made his way up to it when all of a sudden a group of zombies came out of the wood clearing. Daryl and Aaron took them all out while the horse ran off scared.

Carol could be seen speaking with Olivia about the planned food dishes for the party. Two men came up behind them while they were speaking and requested some weaponry for themselves. Carol recovered her food items and also met a man named Toby, who promised to show her around sometime. The sight of an open window popped up onscreen soon after. Daryl and Aaron kept clawing thorough the woods and talked about their current standings with the people of Alexandria. Aaron wanted Daryl to become more comfortable with the people during tonight’s party, but Daryl seemed against the idea.

When the party at Deanna’s home finally got underway, Rick, his baby girl and Carol arrived to a room full of happy guests. Abraham and Rosita arrived and got comfortable themselves once they spotted the beer. Rick met a important man that Deanna introduced him to during the party. The man seemed to know about Rick’s great work with his group outside Alexandria’s walls. Rick took a drink from the man and then spotted Jessie, her husband and their kids walk in.

Back outside Alexandria’s walls, Daryl and Aaron ran into more zombies. Aaron tripped over one and almost got bitten, but Daryl saved his life at the last minute. The horse they spotted earlier ended up getting eaten by the walkers nearby. Daryl and Aaron looked on and then decided to kill of the zombies after they stopped munching on Buttons.