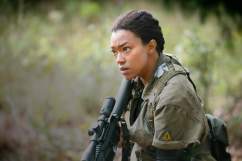 Check out all the highlights of the best moments that transpired during the 14th episode airing of The Walking Dead’s Season 5 run!

1. Father Gabriel Seemingly Gave Up on His Faith

The opening shot showed a pretty calm Alexandria. Father Gabriel could be seen walking by his lonesome. He discovered a bible inside of an empty house and a pair of strawberries gifted to another preacher. The abandoned home seemed to be a Church. Father Gabriel began tearing out all the pages of the Bible in front of him in a rage. He looked up to the roof of the Church with a look of despair on his face.

2. A Group Was Sent Out to a Nearby Power Grid to Find Some Micro-Inverters

Daryl hopped on his repaired motorcycle with a car tailing behind him. He left Alexandria to go on a hunt to find more survivors. Noah met up with one of Alexandria’s community builders. Noah spoke to him in hopes of learning how to craft new buildings for the future of this new safe haven. While they sat and spoke, the older man handed off his notebook to make sure he wrote down everything there is to know about Alexandria. Inside of one of the homes, Abraham could be seen washing his face.

Outside, Noah ran into Eugene. He tried handing off a gun to Eugene, who wasn’t too keen on taking it for the mission ahead. Everyone was heading off to check on a power grid that would do good for Alexandria’s power supply. Father Gabriel stepped out of his place and then waved to the folks that were left behind. While Rick was making his rounds, he discovered Jessie tending to a broken owl. Rick made it his mission to find out who did such a thing to Jessie. Glenn, Noah and the rest of the crew finally arrived at the power grid. Eugene and Tara were seen speaking while they were on their way around the grounds. They argued about who was the sole reason for leading them to their new destination. Noah and Glenn were seen making their rounds as well. They soon came upon a huge horde of zombies, but they chose to head into a garage nearby instead of confronting them head on.

The whole group headed inside to make sure there were no walkers or humans with firearms of any sort. They continued walking through the garage when suddenly they found a huge group of zombies crawling at them from behind a gate. Eugene and Tara walked off to find the micro-inverters the whole group came looking for. Out of nowhere, a zombie with riot gear on started making its way towards one of the survivors. The survivor of the group managed to take him down, but he accidentally shot into a flammable object nearby. Suddenly, the object exploded!

3. Abraham Had to Run Into Action When a Zombie Horde Interrupted Him During His New Job

Glenn was the 1st member of the group to get up. He spotted everyone else trying to recover from the huge explosion. He heard one of them being distraught over the fact that the one who shot at the zombie from before was now dead. A horde of walkers started making their way into the garage. Tara was unconscious while Eugene was caught off guard by a zombie. Glenn saved him before he could be bitten and soon the rest of the started to make their way out.

Carol found one of Jessie’s sons snooping inside the kitchen looking for cookies. She made him quickly leave, but she made sure he went looking for chocolate himself if he wanted to learn how to make some cookies on his own. Glenn and the group hid themselves in a room to get away from the zombies. It turned out that they survivor they thought was deceased was actually still alive. Glenn, Noah and a few other members of the group left Tara with Eugene in the room behind them. Glenn and his crew went out to save their fellow survivor and kill off the zombies still nearby them.

Abraham could be seen working with a bunch of men for an architecture project. While Abraham was deep in thought, several zombies started making their way towards the crew. Abraham and the other members of his crew began putting down the zombies. One of them accidentally shot their fellow work member. Abraham went into action to save her and also stay behind to fend off the last remaining zombies coming his way.