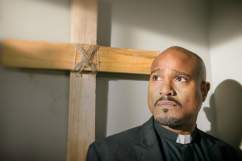 Check out all the highlights of the best moments that transpired during the 15th episode airing of The Walking Dead’s Season 5 run.

1. Deanna Was None Too Pleased With Her Son’s Tragic Death

A zombie could be seen crawling through the dead of night in the woods. Deanna, her husband and another member of the community relaxed in her mansion while she played a mixtape she found earlier. Carol was then spotted in the kitchen putting together a nice dish while she kept her eyes on Rick’s baby. Soon enough, she spotted Sam looking at her through the kitchen window. Sasha kept watch during the evening as the protective sniper in her watchtower position. The same zombie from before was spotted nearing the front gates of Alexandria.

Deanna’s husband requested the mixtape CD be turned off, when suddenly a knock came at their door. Carol chose to leave the dish she made at the front door of Deanna’s home, but Deanna declined the peace offering and burned the letter given to her. Sasha finally shot down the zombie that tried getting into the front gate. Daryl and Aaron went outside the village as well to search for more survivors. Daryl put down a walker and then spotted a flashing light deep in the distant woods.

2. Carol and Rick Spoke More Over How to Handle Jessie’s Abusive Husband

Deanna watched a video of one of the survivors from Glenn’s trip explaining what happened. The scene went back and forth between the explanations that the survivor and Glenn went over about their recollection of the events that took the lives of their friends. The survivor blamed Rick’s group, while Glenn gave his explanation to Rick. Deanna kept watching the video to figure out what was truly happening to her people with the inclusion of Rick’s group. Glenn told Rick that he was almost forced to leave the one survivor behind, but he didn’t. Rick and Glenn discussed how Alexandria’s people wouldn’t prosper without them. Glenn pleaded with Rick to make this living situations work. Rick spotted something in the distance and then walked away.

Jessie and Sam were seen sitting on their front porch. Carol watched as Sam got away from his mother when she reached for him when a friend of his came to pick him up. Carol explained to Rick how Jessie made Sam stay inside his closet while her husband beat her inside their own home. Carol pleaded with Rick to deal with Jessie’s husband by killing him. Rick walked to the front of a riverbed. He pulled out his pistol and almost took aim at a red balloon in the distance. Suddenly, Jessie’s husband came up behind him to see if he was okay. Rick told him to keep walking, which surprised Him. Rick looked to be on the verge of shooting him.

3. Deanna Actually Knew About Jessie’s Abusive Husband All Along

Michonne woke up in the morning and stared at a hamper full of clothing. She hopped out of bed to examine the clothes lying in front of her. She then laid out her work clothes to prepare for the day. Someone knocked on the door. It was the newly recovered Rosita, who came to update her on Tara’s condition and Sasha staying in the watchtower. Michonne and Rosita went looking for Sasha. They both went on the defensive when they thought they heard a walker nearby. They continued their search and spoke about how Nicholas (the survivor that lied about what happened with Glenn and Noah) made them both look at him in a much more negative light.

Deanna looked upon the grave sites for her soon and everyone else who passed on. Rick came to give his condolences and speak to her about Jessie’s husband (Pete). It turns out Deanna knew about this predicament all along. Both went over what would be the proper way to handle this situation. Deanna let Rick know that he couldn’t kill Pete, but Rick made sure to remind her of the dangers that comes with letting him leave Alexandria. They argued until Deanna let Rick know that the way she handles things is the right way to do so.

Michonne and Rosita examined the dead zombies that were shot by Sasha and left behind on her hunting trail. Carl was then seen on his way looking for the quiet young girl that kept her distance from him before. She continued to run through the woods as Carl told her to stop what she was doing and come back with her to Alexandria.