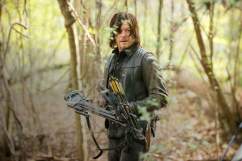 Check out all the highlights of the best moments that transpired during the final episode airing of The Walking Dead’s Season 5 run.

1. Morgan Ran Into Two Men With the Letter W Written on Their Foreheads

A lone car was seen stuck in the woods. Morgan woke up from a deep sleep from inside the vehicle. Morgan exited the car to begin drinking to himself. Out of nowhere, a strange man with a handgun walked up to him. The man told Morgan that what he was cooking looked good. The man sported a W on his forehead, which was explained as an ode to the 1st settlers. Both men spoke calmly or a bit, but the tension was very high. The man spoke about how his group of like-minded tribal survivors survive and meet other folks. The man demanded that he get everything that Morgan currently held. Morgan told the man that he would not allow the man to take him away.

The man held his gun in front of Morgan still. All of a sudden, another man hopped out of the woods to attack Morgan. Morgan took both men down with a wooden stick. After laying his attackers out, Morgan picked up the man’s pistol. A walker came out of the woods and Morgan killed it with his pole. Morgan laid both mysterious men inside his car and blew the horn to signal any walkers to come. Morgan took off afterwards.

2. A Meeting Was Planned for Rick That Very Evening

Daryl rode on his new bike while Aaron tailed him. They both hopped out of their cars to go into the woods. Rick was seen waking up inside a darkened room. His injuries were treated, but the pain from his last encounter was pretty evident. Michonne asked what was so funny when she spotted Rick smiling as he woke up. Michonne told what happened while Rick was knocked out. She asked Rick what he was doing, but Rick didn’t answer her. Pete was put into another house for his own safety. Rick spoke with Michonne about the secrets he didn’t tell her about. Glenn, Carol and Abraham walked in to question Rick soon after. Glenn announced that a meeting was going to be held that would decide Rick’s fate. Carol told Rick what he should do at the meeting and Michonne didn’t look pleased with what was occurring in front of him. Rick told him about his game plan should things break down at the meeting this evening.

Father Gabriel could be seen outside while Maggie started at him with a furious look on her face. Deanna then spoke with Maggie about the meeting that would take place later tonight. Maggie pleaded for Rick to stay, while Deanna and her husband made it clear that they would have to make a tough decision at the meeting. Deanna’s husband spoke with Maggie as she started to leave. Sasha was still outside Alexandria’s walls as she buried her zombie prey. She laid her gun down and tried to lay a final walker down into her ready made coffin. Sasha ended up laying on top of all the dead zombies in a strange moment of peace and solitude.

Daryl and Aaron spoke as they kept trekking through the woods. Aaron told Daryl about a past find and discovery of more survivors as they continued walking. Carol returned to speak with Rick about what occurred the day before. Carol told Rick that she didn’t let Alexandria know about the other weapons they stashed away.

3. Daryl and Aaron Stepped Right Into a Messy Undead Situation

Aaron and Daryl watched a man in a red parka walk through the woods. They noticed how he was able to keep bugs off of him. Rick left his bed placement and walked past three men. Rick locked eyes with Deanna as he kept walking. Nicholas stared at Glenn as he sat to himself. Maggie sat down next to Glenn and spoke about tonight’s meeting. Glenn spotted a man climbing over the gate. Father Gabriel was then seen walking outside of Alexandria’s front gate. Rick arrived at his home and hugged his worried son. Carl told his father that Alexandria wouldn’t survive without him and the rest of the group. Carl pleaded with his father to tell them what they needed to hear.

Daryl and Aaron came up to a gate with walkers behind it. They had a hard time finding the man they hunted from before. Aaron told Daryl it was time to head back, but Daryl decided to keep marching on. Daryl and Aaron killed the walkers and made their way past the gate and into the buildings behind it. Both men walked between a pair of trucks. Aaron discovered a truck that featured an Alaskan license plate on it. Daryl looked at another truck, then madness ensued when all the trucks opened up with several zombies inside each one. Both men fought off the undead horde and locked themselves into a car. More zombies piled up outside their locked vehicle.