Ultron is one of the most ruthless villains in Marvel Comics history. This mechanical being is laying waste to the human civilization in the upcoming Avengers: Age of Ultron film with reckless abandon.

We can’t lie, though. His speech at the start of this 3rd trailer for the film makes us like the guy even more than before. Marvel Studios is getting us extremely excited for the impending return of The Avengers to movie theaters on May 1, 2015. You’ll figure out why when you check out the latest trailer for the film posted above.

Oh and you’re gonna get a kick out of seeing all The Avengers take flight in that snow filled forest. Trust us on that one. And wait…is that The Vision we’re seeing at the end of this trailer? 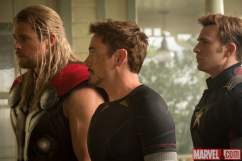