During today’s (March 9, 2015) Apple Watch event, those in attendance got a special treat – a brand new trailer for the 5th season of HBO’s Game of Thrones. Thankfully, this latest piece of footage from the hit series has hit the web. Apple is the only group who has made it available through their Twitter page at the moment, but we’re sure most diehard fans will go through any means to watch it. Get your fill of enormous dragons, political turmoil, blood and more in this exciting bit of new footage.

And for those who want a preview of the 1st three episodes from Season 5, check out the brief descriptions for each one below:

Episode #41: “The Wars to Come”: Cersei and Jaime adjust to a world without Tywin. Varys reveals a conspiracy to Tyrion. Dany faces a new threat to her rule. Jon is caught between two kings. (Written by David Benioff & D. B. Weiss; directed by Michael Slovis.)

Episode #42: “The House of Black and White”: Arya arrives in Braavos. Pod and Brienne run into trouble on the road. Cersei fears for her daughter’s safety in Dorne as Ellaria Sand seeks revenge for Oberyn’s death. Stannis tempts Jon. An adviser tempts Dany. (Written by David Benioff & D. B. Weiss; directed by Michael Slovis.) 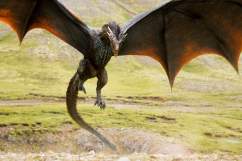