Who is “A” on Pretty Little Liars? The season 5 finale is tonight and the executive producers have hinted that character Andrew Campbell may be A. Could this be true? TV Line had an interview with PLL executive producer Marlene King and wrote that:

King’s reluctance to discuss Andrew’s role in the finale speaks volumes. All she’s willing to say is, “He’s definitely in the finale, and he plays a large role in it.” Seriously, that’s it.

There are also many theories as to why “A” could be Andrew, one being as simple as his name begins with the letter “A”. On the episode “To Plea Or Not To Plea”, “A” is seen stuffing $20 bills into Holy Bibles and the President on those bills is Andrew Jackson. Pretty Little Liars Alloy Entertainment had this as a clue behind the Andrew theory:

The mummy-wannabe that rose from the hospital bed right across from Cyrus Petrillo’s in the burn victim unit was covered in bandages. You know who else is a pro at wrapping body parts? AC, which he made evident when he tended to Aria’s swollen foot like a total medical professional. (Also, the creeper who rose from the bed was tall and had on the same sneakers Andrew was rocking earlier in the episode. Also he and Cyrus look alike. AHH! We’re seeing things now.)

MTV has the theory that Andrew isn’t “A”, but he is helping “A” as they write:

We’re pretty convinced Andrew is working for “A.” The fact that he “saved” the Liars from Cyrus Petrillo was our first clue. Sure, he may just be a chivalrous kind of guy, but what was he waiting around for? Was he spying on them? Yes, of course he was. Not to mention he’s an expert-level pathfinder, which means he can navigate his way around a spooky, wooded area like a pro. And he knows how to use a bow. That probably came in handy when “A” put targets on Caleb and Ezra’s backs.

So, do you think Andrew is “A”? Or, is this theory just a distraction to throw us all off the real “A’s” trail? 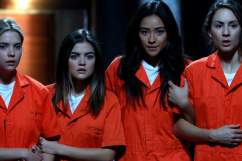 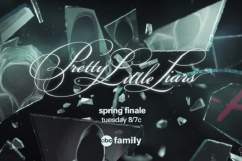 ‘Pretty Little Liars’ Finale Spoilers: Who Is A?