For Eiza Gonzalez, Coachella was the place to enjoy good music and great art in her boho chic style. The first day of the Annual Music and Arts Festival held at the Empire Polo Club in Indio, California, the Mexican actress posted on her Twitter the following:

Coachella Here we go!!! In honor of the weekend where your arm gets covered in pieces of fabric that opens millions of doors to happiness!

And sure she was happy the whole weekend posting pictures of her different outfits at the festival.

Eiza Gonzalez brought her boho chic style to Coachella and posted every outfit on her Instagram and Twitter. Check it out!!!

#InternationalKissDay feliz dÃ­a del beso amoresðŸ˜˜ Sharing a kiss with my favorite chica @ashleygreene this girl is beautiful inside out (clearly) but also the most fun, coolest girls girl out there. â¤ï¸ #Coachella

2. Eiza Gonzalez Hooks Up With Neutrogena

If you don’t know who she is, you will soon. She is the new Neutrogena’s brand ambassador. This year, the Mexican actress added this new title to her resume.

Gonzalez is familiar with the brand because she’s been using it since she was a teenager. So, no more expending money on the product. She can get them for free. Right?

On a statement, the Mexican beauty said:

“I’m humbled to represent a brand that values the Latina culture and encourages women to embrace a natural, beautiful and healthy appearance”.

3.She Had a Fling with Miley Cyrus’s Ex

Eiza Gonzalez and Liam Hemsworth were spotted kissing right after the actor ended his relationship with the “Wrecking Ball” singer. But the hook up only lasted 24 hours, then they went their separate ways. We still don’t know why it didn’t work out. Gonzalez still hasn’t opened up about the relationship. But according to Hollywood Life, Hemsworth told Miley that he found out that Gonzalez was just using him popularity and tipping off photographers. Who knows?! Check out the kiss!

4.Eiza Gonzalez Transforms to a Vampire in ‘From Dusk Till Dawn’

The actress took over the iconic role, once interpreted by Salma Hayek in 1996, Santanico Pandemonium. Now Gonzalez is following her footsteps in the new TV adaptation, you can watch it on Netflix.

Gonzalez made her U.S.A debut with this character that is described as the mistress of evil and the central figure in an ancient cult of bloodsucking vampires. She has the power to stare deep into a person’s soul and know their deepest desires.

In an interview with Latin Times, she confessed she got freaked when she had to shoot a scene surrounded by snakes.

The actress has been open about her romantic relationship with actor DJ Cotrona. They share credits in From Dusk Till Dawn. Cotrona plays the role of Seth Gecko in the TV series.

The two confirmed their relationship after Labor Day Weekend in 2014. Since then the love birds have spent several holidays together.

Gonzalez is always posting pictures of them together and expressing how much she loves him. 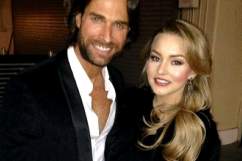