Just a month after celebrity chef Bobby Flay filed for divorce from his wife allegations have been made about Flay and his assistant. Elyse Tirrell has been reported by Page Six to be involved with Flay. The chef and his Law & Order actress-wife, Stephanie March, are in the midst of a messy divorce having been married since 2005.

1. She’s ‘About to Become the Monica Lewinsky of the Food World’

The revelations originated from March’s friend, fellow actress, Maia Madison. She told the New York Post that back during Thanksgiving 2014 “She came to my house and was sobbing uncontrollably. She said, ‘I can’t believe the last 10 years of my life have been a lie.'” Madison added that Tirrell was “about to become the Monica Lewinsky of the food world.” Another friend of Stephanie March told People “This is a very difficult time for Stephanie who is also busy assisting her mother with some serious health issues.”

In a statement to US Weekly, a rep for Flay didn’t deny the report saying:

We will continue to refrain from responding to the continued efforts by certain parties to spread rumors and innuendo. This specific allegation was in a letter sent from one attorney in this case to the other. It was written and then leaked specifically to try to insert this story into the press, and that’s unfortunate. Even more unfortunate is that all of this is being done in order to renegotiate a prenuptial agreement that was agreed to over a decade ago and never amended during the marriage.

Fighting in Flay’s corner is the chef’s business partner Laurence Kretchmer who to Page Six that other scandals could be brewing saying “As ugly as Stephanie is going to look [when this news comes out], she will look uglier when other things come out.” 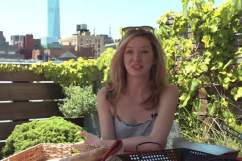 2. One of Her Roles Is to Make Sure ‘Bobby Is Always Caffeinated’

In 2008, Tirrell was hired by Flay to work at his Bar Americain restaurant in Midtown Manhattan. Later, she was promoted to his assistant, according to her bio on Flay’s website. As his assistant, she “is the master scheduler, maintaining Bobby’s ever-changing, always challenging, never empty calendar. Never without her phone or her tablet, Elyse also plays the roll of concierge, making reservations, hunting down elusive ingredients, and making sure Bobby is always caffeinated.” She frequently writes blogs on Flay’s website.

3. She Used to Play Dorothy at a ‘Wizard of Oz’ Theme Park

The bio says that she began working Flay after “a successful tour of Japan as a singer and actor.” She’s a graduate of the American Academy of Dramatic Arts and lives in New York City. Her parents live in New Jersey. During her previous career she worked as a Dorothy impersonator at a Wizard of Oz theme park in North Carolina.

4. Stephanie March Wants More Than the $5,000 Per Month That Flay Is Offering

March and Flay were married in 2005 in New York City. The couple have no children together. In their divorce proceedings, March is contesting a prenuptial agreement which indicates that Flay only has to pay her $5,000 per month, reports TMZ.

March is Flay’s third wife. His first marriage to chef Debra Ponzek ended in divorce in 1993. Flay then married Kate Connelly in 1995 with home he had a daughter, Sophie. Their marriage ended in 1998.

Read More
5 Fast Facts, Breaking News, Celebrities
Is this how Bobby Flay was spicing up his life?