Rapper French Montana has been in and out of Khloe Kardashian’s life throughout the past year. We’ve seen him on Khloe’s TV show Kourtney and Khloe Take the Hamptons as well as Keeping Up With the Kardashians. The couple are currently reported to be on again, but we see a different side to them on KUWTK. Khloe tells her family and friends that she kicked French out of her house and wanted to focus on herself. Even so, she’s still hanging out with him much to the dismay of her friend Malika. Read on for details on French Montana and his relationship with Khloe Kardashian.

1. There Were Rumors That French Montana and Khloe’s Friend Malika Were Talking Behind Khloe’s Back

On KUWTK, we see that Malika doesn’t approve of Khloe talking to French Montana even though they have broken up. However, Hollywood Life previously reported that there were rumors Khloe first dumped French for talking to Malika behind her back. A source revealed that Malika and French had shared text messages without Khloe knowing, but that Malika had come clean, explaining:

She didn’t tell Khloe at first because she didn’t want to hurt her but then she had a heart-to-heart with Khloe and showed her the messages. Khloe was already on the verge of breaking up with French because she had a lot of doubts about him. She trusts Malika like a sister, she knows she’d never stab her in the back that way.

Someday everything will all make perfect sense. Until then…. Vogue! ?

Khloe Kardashian and Lamar Odom are still married and TMZ reports that the two are at risk of having their divorce case dismissed. This can’t be good news for French Montana. Khloe originally filed for divorce in December 2013 and Lamar Odom hadn’t responded. Their home together has been sold and if Khloe doesn’t finalize the divorce, the case could be thrown out, according to TMZ’s sources.

3. The Couple Has Broken Up Several Times

French Montana and Khloe Kardashian have been one and off again with their relationship several times as French Montana explained to talk show host Wendy Williams:

You know like every relationship, you break up, you make up. Right now we’re on real good terms. We’re in a real special zone right now. She’s gonna be my baby forever.

The NY Daily News reported that the couple first split up in September 2014 and then again in December 2014.

4. French and Khloe Appeared in One of French’s Rap Videos Together

When French Montana appeared on Kourtney and Khloe Take the Hamptons, Khloe appeared with him in one of his rap videos. In fact, Scott Disick, Kourtney’s baby daddy and longtime boyfriend was supposed to appear in the video as well, but didn’t show up. Check it out above.

5. The Rapper Spent Quite a Lot of Money On Khloe

According to The Mirror, French Montana dropped quite a bit of money on Khloe Kardashian during the course of their relationship together. The Mirror states:

It certainly was a whirlwind romance as Khloe, who turned 30 on June 27, was thrown a lavish birthday party by her beau, costing French almost $100,000. He reportedly gave her a $49,000 Jeep Wrangler Sahara, a $25,000 ring with natural green Colombian emeralds and natural yellow canary diamonds from Rafaello & Co and custom grills valued at $10,000. 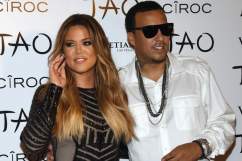