“The House of Black and White” is the second episode in season 5 of HBO’s “Game of Thrones.” In it, Arya arrives in Braavo and Stannis tempts Jon with power, while Daenerys learns that democracy isn’t for everybody. Read on for spoilers. 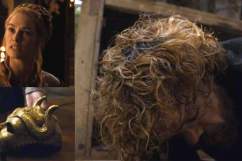 The episode begins with Arya sailing into the harbor of Braavos. According to the Game of Thrones Wiki:

Braavos is one of the Free Cities located on the continent of Essos. It lies east of Westeros, across the Narrow Sea. It is the northernmost, the richest, and arguably the most powerful of the Free Cities. The city spans hundreds of tiny islands connected by small stone bridges.

After Arya is in Braavos, accompanied by the ship’s captain Ternesio Terys, she is taken to the House of Black and White. Terys tells her that she will find the Faceless Men within. After knocking, she is greeted by a monk-like man who informs her that she must be in the wrong place. Arya then presents the coin Jaqen H’ghar had given and says the code word “Valar Morghulis.” The monk-like man schluffs her off and closes the door on her.

Not put off, Arya sits on the steps to the House and names all the people she will kill far into the night as rain pours down onto her. Days pass and Arya continues her sit-in. Eventually she grows weary however and walks away, tossing the coin into the water at the steps of the House of Black and White.

Later, the monk-like man, who reveals himself to be Jaqen H’ghar, finds Arya in the city and brings her back to the House of Black and White.

Elsewhere, Brienne of Tarth and her “squire” Podrick Payne stop to rest at an inn that Sansa Stark and Petyr Baelish, AKA “Littlefinger”, just so happen to have also stopped in. After Littlefinger informs Sansa that his marriage proposal has been accepted, Podrick spots the duo from across the room and directs Brienne’s attention to them. Brienne tells Podrick to ready their horses despite Littlefinger having a guard of knights also in the room.

Brienne approaches Sansa and tells her of the oath she swore to her deceased mother, Catelyn Stark. Littlefinger then cuts down Brienne’s credibility of her ability to protect Sansa. Littlefinger informs Brienne that he is now also Sansa’s uncle and has her best interest in heart. Sansa agrees with Littlefinger and tells Brienne she saw her at Joffrey’s wedding, bowing to the king. Brienne leaves and Littlefinger’s guard tries to stop her, but she escapes with Podrick after a brief chase and battle.

Podrick tells Brienne that if the girls don’t want her protection, she should let them go. Brienne will hear nothing of it.

Back at King’s Landing, Cersei has summoned her brother and former lover, Jaime. She has received a box contraption with a fake snake inside whose mouth holds the necklace of her daughter Myrcella Baratheon, who is really the daughter of her and Jaime, not the deceased King Robert Baratheon. Myrcella Baratheon is therefore both Cersei and Jaime’s daughter AND niece. Cersei had sent Myrcella to Dorne as part of a marriage pact with House Martell, however the House of Martell blames Cersei for the death of Princess Elia and Prince Oberyn Martell, and the death threat is believed to be spurred from these events

Jaime pledges to go to Dorne and bring back Myrcella, who had been promised to Prince Doran Martell’s son, Trystane.

Jaime goes to see Ser Bronn of the Blackwater, who is currently on a stroll with his betrothed Hollis. Jaime informs Bronn that his betrothed is no longer his, per Cersei’s decree. Jaime then tells Bronn that he is going to come with him to sneak Myrcella out of Dorne for a much better girl that comes with a castle.

Later, Cersei meets with the counsel and informs them that until her son comes of age, she will handle all his duties. She then does some rearranging of titles to appease the male-dominated council. However, Kevan Lannister informs Cersei he does not recognize her leadership and returns to Casterly Rock.

In Dorne, Trystane is seen walking with Myrcella in lush gardens while his father, Doran, is berated by his Oberyn’s “widowed” paramour, Ellaria Sand. Ellaria is trying to goad Doran into going to war with King’s Landing over Oberyn’s murder. Ellaria wants to murder Myrcella, too.

At the Wall, Jon Snow deals with the consequences of shooting an arrow into Mance Rayder after he had been sentenced to die by fire. Stannis Baratheon promises to make him Lord Jon Stark, not Snow, if he pledges his allegiance to him. But Jon says he’s going to deny it because he already swore his oath to the Night’s Watch. Later, Jon gets elected as the new head of the Night’s Watch.

Meanwhile in Meereen, Daario Naharis, lover of Daenerys Targaryen and captain of the Second Sons mercenary company, is shown policing the streets with Grey Worm, informing the Unsullied that the Second Sons would be taking over in dealing with the terrorist Sons of the Harpy. After entering a home, Daario catches a member of the Sons of the Harpy, who are intent on reestablishing slavery in the city.

Daenerys decides to give the captured terrorist a fair trial. However, the terrorist gets killed by Daenerys’ servant, a former slave. Daenerys then punishes her servant to death, despite the outcries of the locals. After she carries out his sentences, the townspeople revolt on her.

She flees to the pyramid, where Drogon returns to her briefly before flying away.